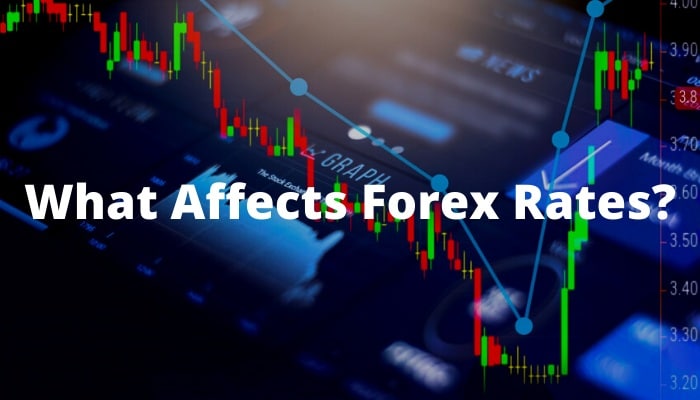 Currency exchange rates have always been a considerable factor used to determine a country’s economic health and stability. This is typically defined as the rate at which one country’s currency is converted into an opposing currency. This rate is the basis of the forex market and trades. Such rates fluctuate daily as the supply and demand of one currency over another alter depending on market fluctuations and other mitigating factors. This article attempts to examine eight major factors that influence exchange rates and explains the reasons behind their volatility.

Inflation is the overall price increase of goods or services in an economy. It negatively affects a country’s currency as each unit does not hold the same value as before, meaning the purchasing power of that currency falls as it can buy fewer goods. The currency of a country with a low inflation rate will usually rise in value, whereas countries with higher inflation rates will typically have their currency depreciate.

Interest is payment due from a borrower to a lender of funds above the principal amount lent. It is calculated as the amount paid or received over a particular period, divided by the principal sum which was initially borrowed or loaned, and displayed as a percentage. Rises in interest rates cause a country’s currency to appreciate because they provide higher rates to lenders, thereby attracting more foreign capital, which causes a rise in foreign exchange rates. Changes between this rate, forex rates, and inflation rates are all interconnected.

Current account refers to a country’s total number of transactions, including but not limited to exports, imports, debts, etc. Spending more on importing products than selling exports causes depreciation for a country. Therefore, many countries attempt to balance this, considering their impact on their domestic currency exchange rate.

Countries with high governmental or national debt levels are less likely to acquire foreign capital, which leads to inflation. As a result, investors will sell bonds, which leads to a decrease in the value of the country’s exchange rate.

The political situation of a country also dramatically affects its currency strength. Less political turmoil is more attractive to foreign investors, as the country is more stable. Additionally, sound financial and trade policies do not leave room for uncertainty.

This is a business cycle contraction due to a generic economic decline. This causes interest rates to fall, which reduces a country’s chances of acquiring foreign capital. As a result, its currency weakens compared to that of other countries, therefore lowering the exchange rate.

This final factor is based on individual and market expectations and predictions. This is because when a country’s currency value is speculated to rise, investors will demand more of that currency to make a profit in the future. As a result, the value and exchange rate of the money will increase.

While the reasons mentioned above do influence foreign currency exchange rates, there is a myriad of other factors that contribute to them as well. However, to attempt to list or know all is futile as such influences can change every day. Nevertheless, one needs to have an adept understanding of such major potential influences and trends in order to trade successfully within this market.