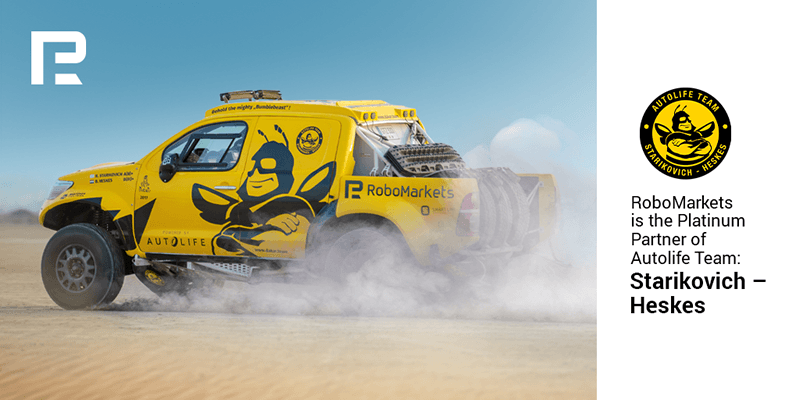 RoboMarkets, a financial company, will be a partner of Autolife team at Greece Offroad 2019. The event will take place from June 6th to 9th 2019 in Kastoria (Greece).

Greece Offroad, a three-day race, which will be held for the seventh time, is considered the largest off-road race in South-Eastern Europe. Autolife team consisting of participants of the Dakar 2017 rally, Roman Starikovich and Bert Heskes, will compete in Greece in a new car, Toyota Hilux Overdrive. RoboMarkets logo will appear on the car and outfits of the team that will defend the honour of Cyprus on the international motorsport arena.

The Greek race may be considered as training before the Dakar 2020 rally, participation in which has been already confirmed by Autolife team.

Konstantin Rashap, CBO at RoboMarkets: “We’re very happy to conclude this agreement and support Autolife, a team from Cyprus, which shows presentable results on a regular basis and represents a real team morale. We’ve been supporting the team of Roman Starikovich and Bert Heskes for some years now, that’s why we know perfectly well that they undertake most difficult projects and accomplish them at the highest professional level.”

The biggest motorsport event in in South-Eastern Europe ran its first edition in 2013. It’s been held every year since in Greek mountains in Western Macedonia and Epirus, one of the most spectacular, but at the same time dangerous, remote, and adverse regions of the country. Races usually take place at the end of May and the beginning of June and cover more than 500 kilometers of special stages.

RoboMarkets is an investment company with the CySEC license No. 191/13. RoboMarkets offers investment services in many European countries by providing traders, who work on financial markets, with access to its proprietary trading platforms. More detailed information about RoboMarkets can be found on the company’s official website at www.robomarkets.com.