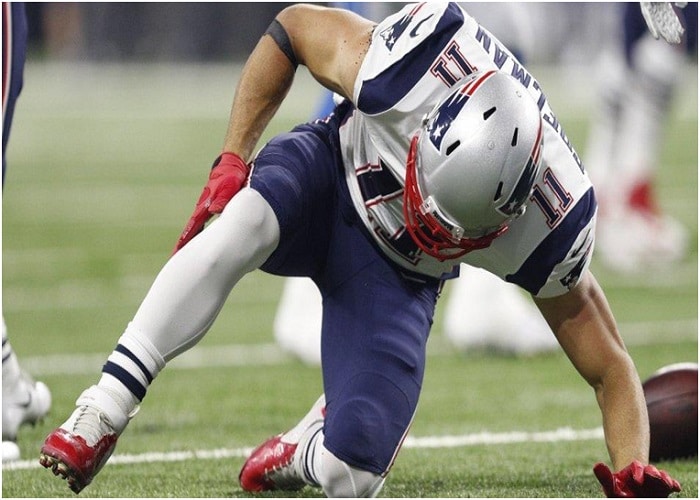 Injuries are an integral part of any sports event, especially football, which has the highest injury rate, as it is a full-contact game. It is difficult to find a worthy replacement when your best player gets knocked out for the season due to an injury.

Navigating your draft board because of training camp injuries and big-name holdouts can feel like navigating a minefield. However, with research and by counting on your draft depth, you can insert capable players into your line-up each week.

When Do Football Injuries Occur?

Practice sessions have the lowest injury rates as coaches control the drills making them a relatively safe environment. However, the chaotic environment of a real game presents much higher risks of injury.

In live game situations, injuries are five to six times more likely to occur as players push their bodies more to perform better and end up with sore muscles.

What Are the Most Common Injuries in Football?

The most common injuries in the NFL occur in the knee, hamstring, ankle, shoulder, and head. However, the severity can range from strains and sprains to muscle tears and traumatic brain injuries. Thus, the recovery time and the impact on fantasy stats vary accordingly.

Knee injuries, such as the ACL, PCL, and cartilage of the knee, are the most common in the NFL. The playground surfaces and cutting motions result in a higher chance of ankle sprains.

These injuries can adversely affect the long-term involvement of a football player in the sport.

Repeated concussions increase the risk of mental illnesses, such as dementia, chronic traumatic encephalopathy, and depression.

In football, concussions mostly occur after helmet-to-helmet collisions, impact against the ground or other players’ knees, and upper-body contact between opposing players.

Repetitive movement and overuse cause low-back pain and knee pain in football players. If a player trains his body beyond its ability to recover, then it leads to the overtraining syndrome.

Intense physical activities result in excessive sweating and deplete salt and water in the body. Painful cramping of major muscle groups is the early symptom of heat injuries. It can result in heat exhaustion and stroke if not treated on time.

How to Deal with Injured Players in Fantasy Football?

Monitor injuries and the status of top football players to achieve fantasy football success. Check for injury reports and pay attention to pregame news to ensure that you do not select an inactive player.

Here is a list of actions you need to take to handle an injured player.

Avoid selecting a player who is listed as Out or on Injured Reserve because the chances are very high that the player will not be able to play future matches.

Also, it rarely happens that a player listed as Doubtful will shift to an active list.

Players listed as Questionable need extra attention. Sometimes they are shifted from the active to the inactive roster just before the game starts. It is also possible that they perform ineffectively due to their injury. Therefore, read the news on a Questionable player to determine his status.

Players listed as Probable almost always play. Thus, the selection from these players is a good idea to improve your draft strategy.

It is impossible to predict injuries, but some players are prone to suffer injuries on any given week. Avoid injury prone players, fragile QBs, and anyone with a history of frequent injuries to play it safe.

You cannot rely on a player who has just recovered from an injury. Avoid selecting such players even if they are not on the inactive list of the injury report.

How to Prevent Football Injuries?

There are concrete actions, such as proper training, technique, and healthy habits, that can be helpful to prevent the likelihood of injuries throughout the football season.

Let’s look at some of the ways to prevent football injuries.

A football player is far more prone to orthopedic injuries if the muscles and ligaments are inactive and inflexible.

During the off-season, have a balanced fitness program, including aerobic exercise, strength training, and flexibility.

2- Warm-up and Stretch Before and After Practice

It is necessary to warm up before any football activity to prevent injuries and maximize flexibility. Cold and stiff muscles and joints are more brittle and prone to injury, especially hips, knees, thighs, and calf muscles.

Dealing with early-season injuries is a hectic task. Ensure that you understand your team and the depth of your draft to replace any injured starters.

It will help you determine whether you need to trade for a player. Also, stay up to date about current trends and weekly injury reports to decide whom to include based on weekly matchups.