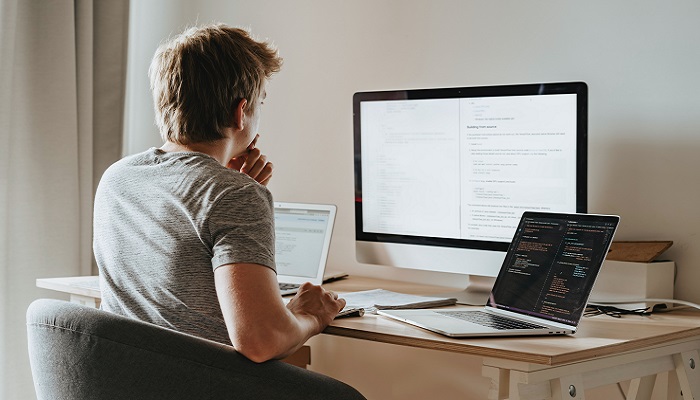 When it comes to front-end development, there’s a number of tools you can choose from. However, it’s likely that your software development provider will advise you to use React for this purpose. Before we start discussing why React.js is a winning choice for building the front-end of your application, let’s get acquainted with this tool.

React, also known as React.js, is an open-source JavaScript library used for creating user interfaces. It was developed by Facebook in 2011 and was used for its inner purposes until 2013. In 2013, Facebook announced React to be an open-sourced library. Nowadays, React is the second most popular framework (after jQuery) among software engineers all over the world. And it’s no wonder that over 9 million websites are built with React, including such famous sites as Netflix, PayPal, Airbnb, Uber, and more.

So why might you want to join those nine million businesses that built their sites on React? There are a number of benefits of using React that can make you choose it, too. We shed light on them in the next section.

Why use React for front-end development

We bet you want the front-end of your application to be interactive, lightweight, and responsive, and it’s possible to achieve with React. Below, we describe the top seven reasons why you should choose React for your app’s front-end.

If you wonder when to use React, we would say – whenever you want. It’s a great solution for any type of apps, be it a website, a web application, or a mobile application. If you visit React’s official website, you’ll find the logo that says “Learn once, write anywhere”, meaning that React developers use a really unique tool. Let’s have a look at different types of applications you can build with React.

These are only a small part of application types that you can build when utilizing React.js development.  This library is also suitable for building educational platforms, file-sharing websites, task management systems, and more. With that said, React is a really versatile tool with a bunch of other advantages. Let’s have a further look.

Being a basis for React Native, a framework for building cross-platform applications, React is used for these purposes, too. If you need to build a mobile app for iOS and Android in one go, React is the best option for you.

By choosing a React Native approach, you need to hire only one team of developers. They will use a common code and wrap it for different platforms. Thus, you’ll be able to build two apps simultaneously. Moreover, you’ll save development expenses since you’ll dramatically decrease the development time and the number of involved software engineers.

One of the peculiarities of React is Virtual DOM that is a simplified version of Real DOM. DOM stands for Document Object Model and is a tree-like representation of a site in a hierarchical structure. Once a user wants to update a single element of a website, the whole DOM structure is reloaded, and it takes time that users might not want to spend waiting.

In the case of virtual DOM, page update happens easier and faster. Once a user clicks on a button, the following happens:

This is how fast rendering is achieved. As a result, users can explore your website without delays. It adds to the user experience greatly.

When you order React.js development services, you want to get a robust software solution without spending a lifetime on its development. And it’s possible to do with React as it provides an opportunity to boost the productivity of React developers.

The thing is that developers can use React with JavaScript, TypeScript, and JSX that allow them to create reusable components. Reusable components, in turn, allow engineers to save time when working on software solutions.

Another thing about React that helps developers to be more productive is the availability of DevTools – browser extensions that inspect React component trees, monitor the state of components, provide debugging tools, and more. By using these DevTools, React developers get rid of the necessity to use several programs in the process of coding: they have everything necessary at hand. They can also do a lot of tasks automatically that dramatically decreases development time and as a result, customers’ money.

Testing a code can be a headache but not in the case with React. Here are several things that make testing React-driven applications almost effortless:

One of the best ways to promote your website is to make it SEO-friendly. Search engine optimization aims at finding the most relevant websites that contain the information users look for.  While there are some challenges in making React apps SEO-friendly, it’s still possible.

Actually, React-and-SEO-related issues aren’t as critical nowadays as they were several years ago. There were times when Google bots couldn’t see and index JavaScript pages. But in 2015, Google announced that it improved its crawlers’ ability to index JavaScript files, and as a result, React-driven pages. It meant that websites and applications built with JavaScript could be seen by search engines.

However, the problem remains with single-page applications (SPAs) that are often built with React. Since SPAs are rendered on the client side, Google bots have trouble seeing their content and indexing them properly.  Luckily, it’s easy to solve this issue with the help of server-side rendering. By applying serving-side rendering, React front-end developers make SPAs visible for Google crawlers faster.

We have already mentioned that React is an open-source JavaScript library, meaning that it is constantly supported, improved, and extended by a large community of developers. React repository on GitHub counts more than 160.000 stars. Similar is the number of answered questions related to React on Stackoverflow.

Discord Getting Started Guide: What You Can and Can’t Do With It