Too much of a good thing: Excessive contact between cellular organelles disrupts metabolism in obesity 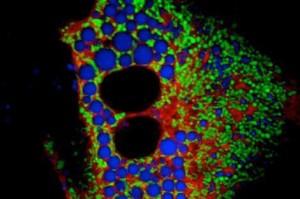 A primary hepatocyte from an obese mouse, showing close interaction between the endoplasmic reticulum (red) and the mitochondria (green). Lipid droplets are shown in blue.

Boston, MA – Researchers at Harvard School of Public Health (HSPH) have found a novel mechanism causing type 2 diabetes that could be targeted to prevent or treat the disease. The research highlights a previously unrecognized molecular pathway that contributes to the malfunction of liver cells in obesity, leading to insulin resistance and diabetes.

“While it is well-established that obesity generates cellular and molecular stress leading to abnormal functioning of many cellular processes, the mechanisms remain incompletely understood,” said senior author Gökhan S. Hotamisligil, chair of the Department of Genetics and Complex Diseasesand the Sabri Ülker Center for Nutrient, Genetic, and Metabolic Research. “Our study revealed that one of these mechanisms involves metabolic stress-induced structural changes within liver cells that compromise their function.”

The researchers used electron microscopy and other imaging techniques to view thousands of cells from the liver tissue of lean and obese mice. They counted each of the contact points between two cellular organelles — the endoplasmic reticulum (ER) and mitochondria — and demonstrated for the first time that the number of these connections, called MAMs, markedly increase during obesity.

Under normal conditions, these connections are necessary for the function of both organelles. However, co-authors Ana Paula Arruda, Benedicte Pers, and colleagues showed that the increased connectivity resulted in an excess of calcium being transferred from the ER to the mitochondria, leading to mitochondrial stress. In an elegant proof-of-principle approach, the researchers used synthetic molecules to decrease the physical distance between the ER and mitochondria in cells and in liver tissue and found that this intervention impaired mitochondrial function and made mice more sensitive to high fat diet-induced insulin resistance and diabetes.

The researchers also demonstrated that by disrupting the ER-mitochondrial interactions and calcium transfer, they could markedly improve the metabolic health of obese diabetic mice — pointing the way to a potential treatment target in humans. “It turns out that the enhanced MAM formation in obesity is too much of a good thing, leading to functional failure of multiple organelles and amplification of cellular stress,” Hotamisligil said.

This work was supported in part by the National Institutes of Health (DK52539 and 1RC4-DK090942). Ana Paula Arruda is supported by PEW Charitable Trusts. Benedicte Pers is supported by the Alfred Benzon Foundation (Denmark).

Cancer turns blood vessels over to its cause