A new ultrathin multilayered material can cool buildings without air conditioning by radiating warmth from inside the buildings into space while also reflecting sunlight to reduce incoming heat. 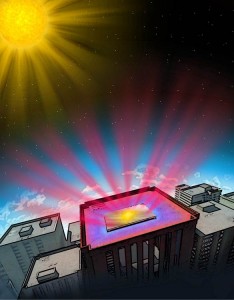 Stanford engineers have invented a revolutionary coating material that can help cool buildings, even on sunny days, by radiating heat away from the buildings and sending it directly into space.

The heart of the invention is an ultrathin, multilayered material that deals with light, both invisible and visible, in a new way.

Invisible light in the form of infrared radiation is one of the ways that all objects and living things throw off heat. When we stand in front of a closed oven without touching it, the heat we feel is infrared light. This invisible, heat-bearing light is what the Stanford invention shunts away from buildings and sends into space.

Of course, sunshine also warms buildings. The new material, in addition dealing with infrared light, is also a stunningly efficient mirror that reflects virtually all of the incoming sunlight that strikes it.

The result is what the Stanford team calls photonic radiative cooling – a one-two punch that offloads infrared heat from within a building while also reflecting the sunlight that would otherwise warm it up. The result is cooler buildings that require less air conditioning.

“This is very novel and an extraordinarily simple idea,” said Eli Yablonovitch, a professor of engineering at the University of California, Berkeley, and a pioneer of photonics who directs the Center for Energy Efficient Electronics Science. “As a result of professor Fan’s work, we can now [use radiative cooling], not only at night but counter-intuitively in the daytime as well.”

The researchers say they designed the material to be cost-effective for large-scale deployment on building rooftops. Though still a young technology, they believe it could one day reduce demand for electricity. As much as 15 percent of the energy used in buildings in the United States is spent powering air conditioning systems.

In practice the researchers think the coating might be sprayed on a more solid material to make it suitable for withstanding the elements.

“This team has shown how to passively cool structures by simply radiating heat into the cold darkness of space,” said Nobel Prize-winning physicist Burton Richter, professor emeritus at Stanford and former director of the research facility now called the SLAC National Accelerator Laboratory.

Using a window into space

The real breakthrough is how the Stanford material radiates heat away from buildings.

The first part of the coating’s one-two punch radiates heat-bearing infrared light directly into space. The ultrathin coating was carefully constructed to send this infrared light away from buildings at the precise frequency that allows it to pass through the atmosphere without warming the air, a key feature given the dangers of global warming.

“Think about it like having a window into space,” said Fan.

But transmitting heat into space is not enough on its own.

This multilayered coating also acts as a highly efficient mirror, preventing 97 percent of sunlight from striking the building and heating it up.

“We’ve created something that’s a radiator that also happens to be an excellent mirror,” said Raman.

Together, the radiation and reflection make the photonic radiative cooler nearly 9 degrees Fahrenheit cooler than the surrounding air during the day.

The multilayered material is just 1.8 microns thick, thinner than the thinnest aluminum foil.

It is made of seven layers of silicon dioxide and hafnium oxide on top of a thin layer of silver. These layers are not a uniform thickness, but are instead engineered to create a new material. Its internal structure is tuned to radiate infrared rays at a frequency that lets them pass into space without warming the air near the building.

“This photonic approach gives us the ability to finely tune both solar reflection and infrared thermal radiation,” said Linxiao Zhu, doctoral candidate in applied physics and a co-author of the paper.

“I am personally very excited about their results,” said Marin Soljacic, a physics professor at the Massachusetts Institute of Technology. “This is a great example of the power of nanophotonics.”

From prototype to building panel

The second problem is production. Right now the Stanford team’s prototype is the size of a personal pizza. Cooling buildings will require large panels. The researchers say there exist large-area fabrication facilities that can make their panels at the scales needed.

More broadly, the team sees this project as a first step toward using the cold of space as a resource. In the same way that sunlight provides a renewable source of solar energy, the cold universe supplies a nearly unlimited expanse to dump heat.

“Every object that produces heat has to dump that heat into a heat sink,” Fan said. “What we’ve done is to create a way that should allow us to use the coldness of the universe as a heat sink during the day.“

Too much of a good thing: Excessive contact between cellular organelles disrupts metabolism in obesity