The new smart fortwo and forfour: Adding a new shine to a proven concept

The revolution enters the next round – the smart fortwo has undergone improvements in virtually all areas and is markedly more comfortable. The hallmark smart rear engine concept is being offered for the first time in the four-seater smart forfour as well.
Drive power is supplied by state-of-the-art three-cylinder engines rated at 45 kW/60 hp, 52 kW/71 hp and 66 kW/90 hp, while power transmission is performed by a five-speed manual transmission or the twinamic automatic dual clutch transmission. A host of innovative details guarantee even more fun in the city. The new smart generation will be launched onto the market in Europe in November. The price for the smart fortwo will correspond to that of the current smart series, while the smart forfour will cost only around 600 euros more with the same engine.
“As Europe’s youngest car brand, smart enjoys global success today. No-one combines functionality and emotionality as well as we do, as the inventors of individual urban mobility. The new smart fortwo and forfour adopt the proven concept while offering more of just about everything – more space, more colour, more equipment … and even more fun in the city! Only the vehicle length remains as unique as ever, at 2.69 metres,” says smart boss Annette Winkler. “Our idea based on a total rethink of urban mobility has won through.”

“In the planning phase we were clear that we wanted to retain the rear engine for the new smart, so as to continue to exploit the vehicles’ strengths to the full in the city,” explains Jörg Prigl, head of the product group Compact Cars at Mercedes-Benz. “On this basis, we then developed the new fortwo and forfour together with our partner, Renault.”
“We are proud to have made the fortwo even safer and in sum more grown up whilst retaining its length of 2.69 metres,” adds Markus Riedel, head of development at smart. “In doing so we even reduced the turning circle to 6.95 metres and thus set a new benchmark. The fortwo shares its architecture with the new forfour; both cars are tailor-made for the requirements of modern city traffic.” 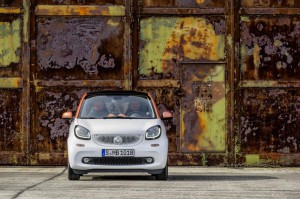 The brand appeals to the heart and mind in equal portion. An expressive design idiom and colouring embody pure joie de vivre. The compact proportions and clever details attest to unique functionality. The new smart fortwo and the new smart forfour are clearly recognisable as members of the same family. Many design features such as the headlamps, the cooling air grille in the front and the iconic tridion safety cell are identical, for example. And both vehicles are fitted with rear engines, making them particularly agile in urban traffic.
“smart stands for FUNctional design, as the brand is defined by two poles – the heart and mind. The design idiom is clear and purist and therefore very progressive. The typical smart attributes are being carried into a new era: the typical silhouette with the ultra-short overhangs, the clear lines, forms and surfaces, the tridion cell and the updated, likeable smart face,” says Gorden Wagener, Head of Design at Daimler AG. “It is never easy to design the successor to a design icon – but it is all the more exciting.”
Extreme agility and optimum use of space – more fun in the city
Short overhangs, minimal length, high steering angle. The new smart models have everything it takes to manoeuvre elegantly into any parking space – and around every corner, too. When it comes to the turning circle, the new smart fortwo sets a new benchmark: at 6.95 m (from kerb to kerb) and 7.30 m (from wall to wall) it makes turning manoeuvres extremely simple. And the new smart forfour turns almost as compactly as the previous fortwo (wall to wall: 8.75 m). Its statistics are 8.65 m (kerb to kerb) and 8.95 m (wall to wall). 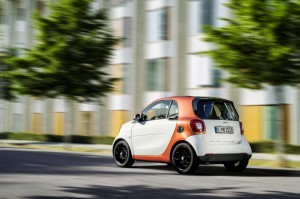 The new models also come up trumps once again with regard to the maximum of space packed into minimal dimensions, as documented by the excellent body space index. Additional highlights include the rear doors opening by almost 90° on the smart forfour and the folding front passenger seat backrest which comes as standard for all variants.
Real Life Safety – safety features
The essential safety concept embodied so successfully by the preceding models has been retained. Like a nut, the soft interior is protected from harm by a rigid shell: the tridion cell. A high proportion of ultra-high strength hot-formed steels and maximum-strength multiphase steel is now used on the new smart. In keeping with the Mercedes-Benz “Real Life Safety” philosophy, the focus in car-to-car crash tests was on compatibility with substantially larger and heavier vehicles. The new smart vehicles performed well in frontal collisions with the S- and C-Class.
Advanced assistance systems which were previously the reserve of higher classes of vehicle further enhance safety and comfort. These include Crosswind Assist (standard), forward collision warning (option) and Lane Keeping Assist (option).
A new front axle design adopting elements of the previous Mercedes-Benz C-Class, an optimised De Dion rear axle, substantially increased spring travel all round, tyres with higher side walls and an unprecedentedly small turning circle are the highlights of the new chassis. The chassis and suspension of the new smart generation have been evolved on the basis of the experience acquired with previous smart models and designed for markedly enhanced ride comfort.
New three-cylinder engines, dual clutch transmission – the drive system
Two state-of-the-art three-cylinder engines will be available for the new smart models at the market launch: the naturally aspirated engine generates 52 kW/71 hp from a capacity of 999 cc. The engine’s ample torque from an engine speed as low as 1000 rpm (maximum: 91 Nm at 2850 rpm) enables particularly economical driving in high gears, even in urban traffic. Top of the range is the turbo engine rated at 66 kW/90 hp. The 898 cc engine mobilises maximum torque of 135 Nm at 2500 rpm. The totally new turbocharger features an electronically controlled wastegate which enables increased engine dynamics in conjunction with a sustainable reduction in fuel consumption. Another distinguishing feature is the automatic start/stop system. 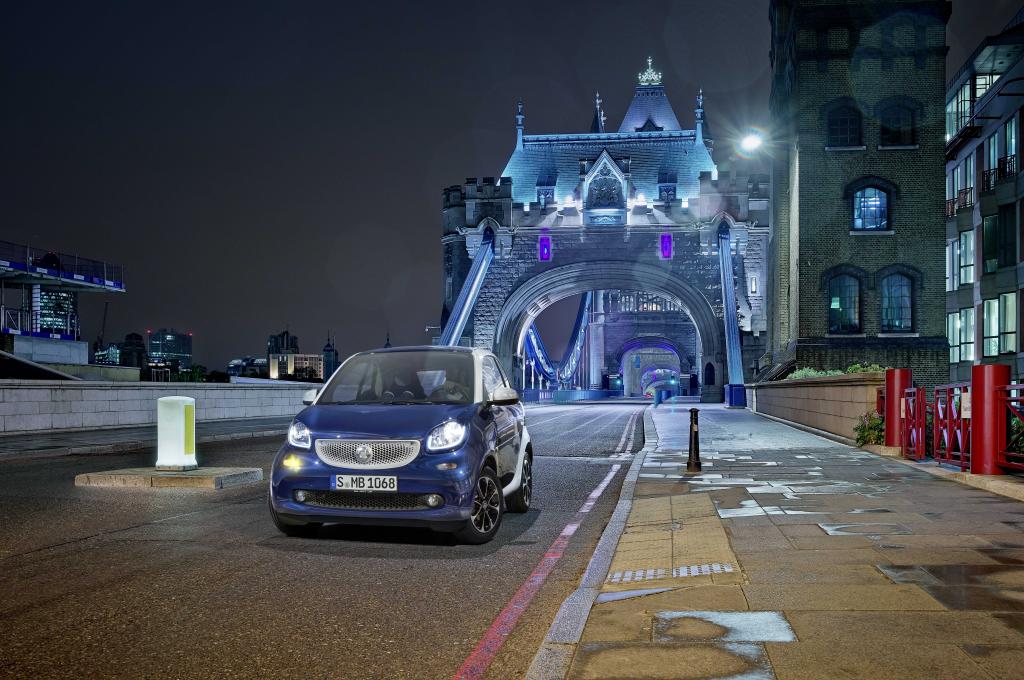 Apart from the turbocharger, a whole range of other technical measures also contributes to the engine’s excellent fuel efficiency and performance. These include variable swirl control and variable adjustment of the inlet valves. Another defining trait of the all-aluminium three-cylinder engine is the square bore/stroke ratio. A few months after the market launch, a basic petrol engine rated at 45 kW/60 hp will extend the range.
Both transmission variants are also new for smart: customers can choose between a five-speed manual transmission and the twinamic six-speed dual clutch transmission.
passion, prime and proxy – the new lines
Three equipment lines (passion, prime and proxy) and a wealth of optional items, some of which were previously the reserve of higher segments, make every smart fortwo or smart forfour a unique gem in its own right. Even in the entry-level version, both models offer a comprehensive scope of safety and comfort features. These include LED daytime driving lights, central locking with radio remote control, visual locking-verification signal and immobiliser, cruise control with limiter (variable speed limitation), exterior temperature indicator with frost warning, instrument cluster with monochrome LCD display and trip computer and electric windows in the front.
passion, prime and proxy are the names of the three lines which serve to upgrade the smart fortwo and smart forfour and provide for differentiation particularly in the interior. Their features include a leather multifunction steering wheel, an instrument cluster with 3.5 colour display and heated seats. 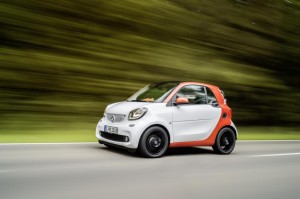