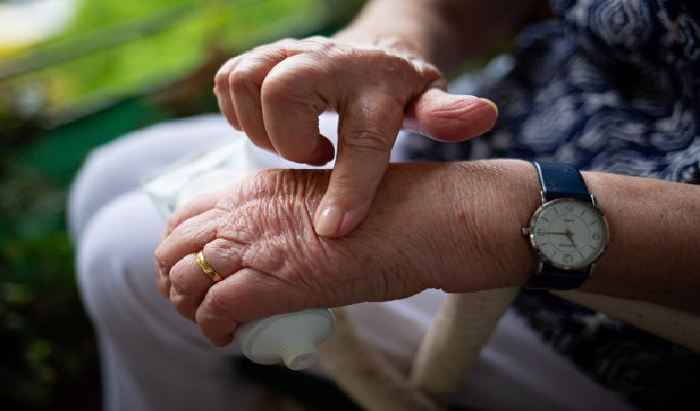 People with Rheumatoid Arthritis (RA) could soon benefit from a new drug treatment that not only suppresses inflammation but also significantly reduces patient reported pain scores. Otilimab is a monoclonal antibody, biologic drug, which targets and suppresses the inflammatory cytokine GM-CSF.

In a multicentre, dose-ranging trial, led by Professor Chris Buckley at the Universities of Oxford and Birmingham, and sponsored by the Pharmaceutical company GSK, researchers explored the clinical effects of otilimab to prevent inflammation, tissue damage and pain in people with RA.

The study evaluated the effects of five doses of otilimab (22·5 mg, 45 mg, 90 mg, 135 mg, or 180 mg) versus a placebo. 222 patients with active RA received weekly subcutaneous injections for 5 weeks, which was reduced to every other week for one year.  A range of patient reported outcomes for function and pain were measured. Otilimab treatment led to a rapid reduction in tender and swollen joints but patients also reported very significant improvements in pain scores.

Professor Buckley, Kennedy Professor of Translational Rheumatology at the Universities of Oxford and Birmingham said: “The assumption has always been that if drugs suppress inflammation, they will also help suppress pain, but this hasn’t always been the case. Now, for the first time we are seeing a biologic therapy, the first in the rheumatoid space, that offers two for the price of one. It’s suppressing inflammation, but it’s also helping pain, and that’s very important to the patient.”

The trial was novel in that it offered an escape arm for patients receiving the placebo or in whom the drug dose to which they were randomised did not achieve a reduction in their disease activity. “One of the problems with placebo arms is it’s hard to get people to go into the study if they know they might get a dummy drug ,” said Prof. Buckley. “In this trial, if a patient wasn’t seeing improvements after 12 weeks they were automatically transferred to the highest dose of otilimab at 180 mg and we were able to then see the improvements.”

This study helped lay the infrastructure groundwork for the CATALYST Trial, also a collaboration between Oxford and Birmingham, which is measuring the effectiveness of GM- CSF and another anti-inflammatory drug (anti TNF) in the treatment of COVID-19.

The results of the trial have been recently published in The Lancet Rheumatology.

The research was funded by GSK.

About the Nuffield Department of Orthopaedics, Rheumatology and Musculoskeletal Sciences (NDORMS)

The Nuffield Department of Orthopaedics, Rheumatology and Musculoskeletal Sciences (NDORMS) is a multi-disciplinary department focusing on discovering the causes of musculoskeletal and inflammatory conditions to deliver excellent and innovative care that improves people’s quality of life. The largest European academic department in its field, NDORMS is part of the Medical Sciences Division of the University of Oxford, and is a rapidly growing community of more than 500 orthopaedic surgeons, rheumatologists and scientists all working in the field of musculoskeletal disorders.

The research work of the department takes place in several locations across the Nuffield Orthopaedic Centre, namely the Botnar Research Centre, the Kennedy Institute of Rheumatology, and the Kadoorie Centre. The co-location with NHS services puts the department in an excellent position with basic researchers working alongside clinicians. This substantially improves research capacity, improving access for researchers to patients, and facilitating the interaction between clinicians and scientists that is essential for successful medical research.

About the University of Birmingham

The University of Birmingham is ranked amongst the world’s top 100 institutions, and its work brings people from across the world to Birmingham, including researchers and teachers and more than 6,500 international students from nearly 150 countries.