Interestingly, central banks themselves are less confident than markets and, again, for good reasons. They don’t like being the only policy game in town, particularly given the extent to which economic growth has repeatedly undershot their expectations and forecasts. After all, monetary policy makers don’t have the tools to remedy long-term neglect of growth drivers such as infrastructure investment and labor-market reforms; unbalanced demand patterns involving a mismatch between the willingness and ability to spend; and pockets of excessive indebtedness that smother economic growth and new investments. 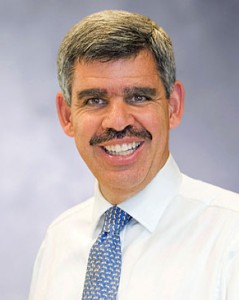 That isn’t the only thing worrying central banks. If anything, the latest unexpected interest-rate cut by China’s central bank and a comment by the European Central Bank’s president implying that more monetary easing is needed reflect weakness, not strength. This can be seen in the reduced forecasts for economic growth worldwide and, in the case of the euro zone, signs that the region is on the verge of price deflation.

Central-bank anxiety about economic growth won’t matter much to markets in the short-term. After all, investors have been conditioned to bet that monetary stimulus will boost financial-asset prices. And while investors recognize that central banks haven’t been able to do much to deliver a growth breakthrough, this doesn’t matter much in the short-term as long as central banks are willing to lower rates or use other stimulus tools at every sign of weakness.

Beyond the immediate market exuberance, investors would be well advised to keep three points in mind as they prepare for further central-bank support.

With every new round of central-bank leverage, markets are increasing their bet on two untested phenomena. The first is immaculate growth, or the idea that central banks might succeed in establishing new growth engines even though they don’t have the tools to do so; and the second is the effectiveness of untested measures aimed at limiting the collateral damage from excessive risk-taking.

Not all central banks are increasing monetary stimulus. Most notably, the U.S. Federal Reserve is likely to continue diverging from the ECB and others, easing its foot off the accelerator (albeit really carefully). This divergence will likely emerge as a more important theme in 2015 that will require adjustments that go beyond just dollar strengthening — and that could cause volatility.

Considerable risk-taking in the financial markets has yet to be matched by a willingness by corporations to take on more risk. Even companies with plenty of cash on their balance sheets generally prefer to use it for dividends, share buybacks and defensive acquisitions. Until that changes, and unless sales and earnings growth accelerate, markets will struggle to validate inflated financial-asset prices.

Markets are right to welcome additional support from central banks. But in doing so, investors shouldn’t lose sight of the longer-term issues. So in taking on additional risks, they should remain liquid too, retaining the ability to be flexible.