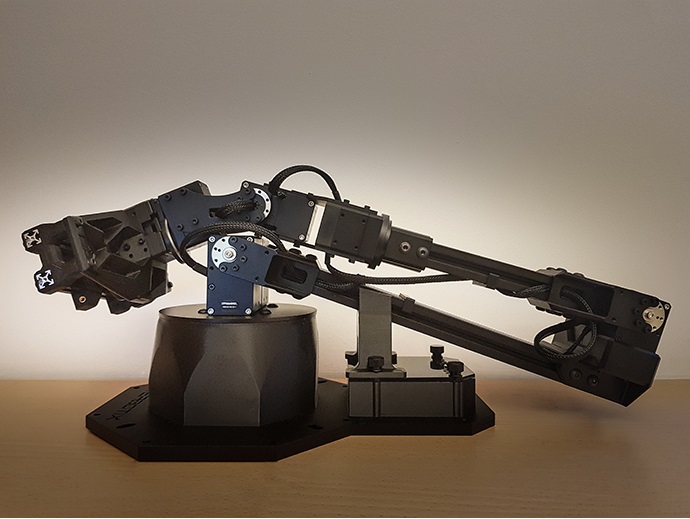 What’s New: Intel and Accenture announced they are supporting an Intel Neuromorphic Research Community (INRC) project led by the Neuro-Biomorphic Engineering Lab at the Open University of Israel in collaboration with ALYN Hospital. Using funding and technology support from Accenture, as well as Intel’s neuromorphic technology and algorithmic support from Applied Brain Research (ABR), the Israeli research teams will develop a wheelchair-mounted robotic arm to assist patients with spinal injuries in performing daily tasks. The device will be clinically evaluated and tested with children at ALYN Hospital, Israel’s most advanced adolescent rehabilitation center.

“Neuromorphic computing is a natural fit for assistive technologies, given its low power requirements and ability to learn and adapt to new situations in real time. Through Intel and Accenture’s work with the Open University of Israel and ALYN Hospital, we hope to unlock new capabilities for mobility impaired children and improve the patients’ quality of life.”
–Mike Davies, director of Intel’s Neuromorphic Computing Lab

Why It Matters: More than 75 million people in the world require a wheelchair for mobility. For those with neuromuscular or spinal cord injuries that result in upper extremity impairments, even the most basic tasks – like drinking from a cup or eating with a spoon – can become insurmountable. Among such patients, the ability to reach and accurately manipulate objects is consistently rated as one of their most important challenges1.

Assistive robotics can fill this gap. Studies suggest that wheelchair-mounted robotic arms provide an increased sense of independence for users, and that these assistive tools can reduce the need for caregiver time by up to 41%1. Today, however, the cost of these devices is incredibly high, making them virtually inaccessible to most people who need them. This is largely due to the expensive parts needed to enable the arm to adapt to the user and the environment in real time.

The real-time learning capability of Intel’s neuromorphic research chip, Loihi, shows potential to reduce the cost of creating and operating such devices. By utilizing Loihi’s real-time learning, researchers predict they can implement adaptive control to enhance the arm’s functionality, while using affordable parts that could reduce the cost by more than 10 times. Loihi’s power efficiency also shows promise for making assistive technologies more useful and effective in real-world situations. Because Loihi is up to 1,000 times more energy efficient than general-purpose processors, a Loihi-based device could require less frequent charging, making it more ideal for use in daily life.

Edy Liongosari, Technology Innovation growth and strategy lead and chief research scientist at Accenture, said, “This research project is a powerful demonstration of the impact that neuromorphic computing can have on the development of affordable intelligent assistive devices. Making these devices accessible, particularly to such young patients, can have a profound impact on their independence, improving the way they live. We are looking forward to teaming closely with the Open University of Israel researchers, ALYN and Intel, contributing our technical and industry experience to advance this technology for those who need it the most.” 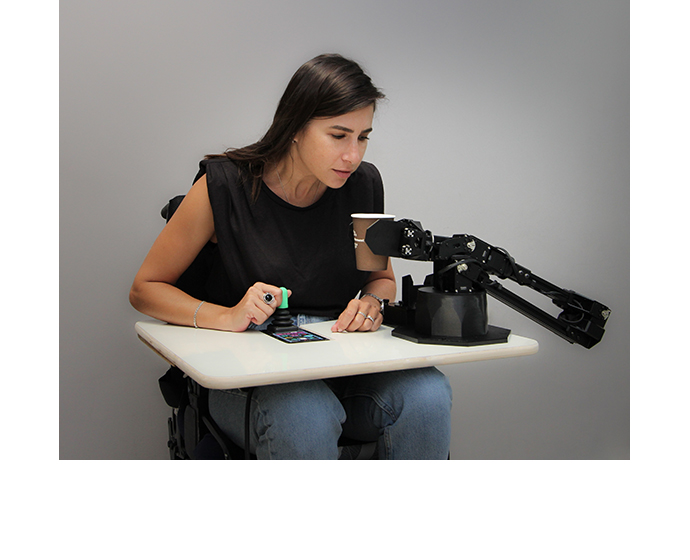 A member of the ALYN Hospital team demonstrates the use of a robotic arm designed to assist patients with spinal injuries in performing daily tasks. Using funding and technology support from Accenture, as well as Intel’s neuromorphic technology, researchers from the Open University of Israel and ALYN Hospital will refine the device and clinically evaluate it with pediatric patients. (Credit: ALYN Hospital)

About the Research: Researchers at the Open University of Israel and ALYN have already created the robotic arm they will use in their trial; the next step is to build the neural network model that controls the arm. To do this, the research team will build on the recurrent error-driven adaptive control hierarchy (REACH) algorithm, which was developed by ABR and is being provided by the company for this project. Paired with neuromorphic computing, the REACH model has been demonstrated by ABR to move a simpler robotic arm through complex paths – such as handwritten words and numbers – with fewer errors and a significant improvement in energy efficiency over traditional control methods2, 3.

Once the algorithmic work is complete, the research team will deploy the new model on Intel’s neuromorphic hardware and test the capabilities of the arm. After making refinements, the device will undergo clinical testing and evaluation at ALYN Hospital with patients who rely on electric wheelchairs and have motor impairment of their upper extremities. The participants will control the arm using a small, dedicated joystick, and researchers will collect information on the robotic arm’s performance to assess its usefulness.

“We believe that the development of a robotic arm based on neuromorphic computing can be a game-changer for people with disabilities. It could make it easier for them to engage with the community, boost their independence and grant them new employment opportunities,” said Arie Melamed-Yekel, general manager of ALYNnovation at ALYN. “The expected cost and performance improvements are potentially disruptive to this market. We are proud to lead this revolution together with the Open University, Intel and Accenture.”

Researchers from Accenture Labs and Intel Labs will leverage their experience in neuromorphic computing and artificial intelligence (AI) to assist with the development of the neuromorphic algorithm, as well as provide support for the design of the study.

“The ability of robotic arms to benefit people today is largely limited due to high cost and excessive power consumption,” said Elishai Ezra Tsur, lead project researcher at the Open University of Israel. “This funding from Accenture, along with additional support from Intel and ABR, is allowing us to explore the implementation of adaptive controls on neuromorphic hardware in an effort to address the need for a collaborative, user-friendly, accurate robotic arm at a significantly reduced cost.”

What’s Next: If this project is successful, the research team plans to explore how to produce this assistive robotic arm for patients. In addition, they plan to investigate applications of adaptive control technology in flexible manufacturing and industrial automation.

Intel and Accenture will also continue to collaborate to identify and fund additional neuromorphic research that has the potential to advance the field.

Related Topics:Neuromorphic Research Project
Up Next