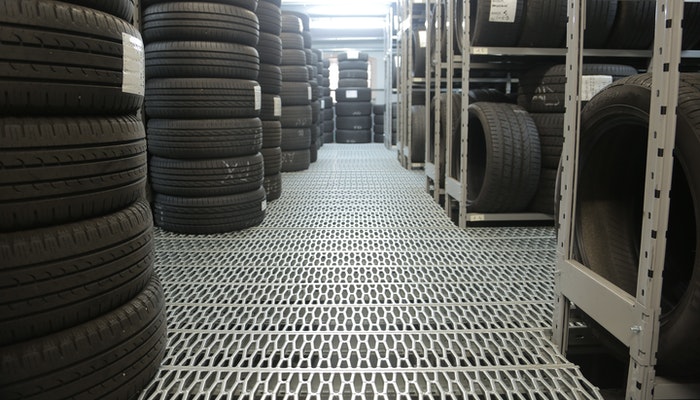 More than 20 million cars are sold every year, in every shape, size and colour imaginable.

But have you ever wondered why the tires of any vehicle for that matter are always black? Is it to match the road? But why are the roads black in the first place? Why not orange or blue?

The first roads were plain dirt paths covered with stone and mud (they were brown). When people first noticed this, they paved the road with straw which made the roads look golden in colour. This perhaps became the first road ever paved in the history of mankind. As time elapsed, roads were paved with pebbles, cobblestones and even shells.

There still exists a road made of cobblestones in Puerto Rico that are blue in colour.

So since when have the roads become black? Modern roads are made using a combination of asphalt, bitumen, and other petroleum products. This combination actually is a durable mixture that melts easily and spreads smoothly across a road’s surface.

Naturally, this mixture is very dark and so are our roads. You can make asphalt colourful too but that will simply escalate the cost that’s the actual reason as to why our roads are black in colour.

Head to Texas and there you’ll find roads made of red clay, that’s because roads over there are made of an aggregate of red rock found in Texas.

Wheels weren’t always black. Chariot wheels were bronze in colour. Carts and wagons pulled by horse, donkey and other animals had wooden wheels that were sometimes painted. The first tires were actually made out of leather, they smoothed the ride, but they would quickly wear out.

But have you ever travelled on a cart or wagon donning wooden wheels?

You’ll mostly regret as the ride will perhaps be the bumpiest ride you have ever had. That’s when rubber tires came to rescue. The shock absorption capacity of rubber is one of the best, they are durable too and much better when compared to say leather.

But again isn’t rubber white in colour? Then why are the tires black?

We let the axle in vehicles have its original metallic silvery colour. Axles, as you know, need to be strong and reassuring but why is it called an axle when it isn’t an axe? You never cut down trees with your car right?

Axle comes from the Latin word “axis” which means root and it also means pivot or line.

Now back to tires…

If you look at some old movies you’ll notice some cars having white tire walls. The chauffeurs in these old movies are constantly shown polishing the tires. Imagine how tough it is to keep the white tires clean knowing how much of a dirt magnet the colour is.

So had the manufacturers added a chemical compound called, “Carbon Black,” to their product to save chauffeurs??

Just think once again, why would anyone travel to the opposite end of the colour spectrum to get a colour like black for their tires?

The cars we buy generally come painted in a single shade most often and yes I agree that it’s quite boring and bland! Older cars had this option of getting painted in dual-tone shade.

Early car manufacturer Henry Ford is the one who first set the trend, he said: “Any customer can have a car painted any colour that he wants so long as it is black.

A car or any vehicle for that matter is exposed to abiotic factors like wind, rain, snow, mud and even collision if you are not lucky, therefore, car paint undergoes lots of wear and tear. That’s why Henry Ford and his team developed a super-tough, asphalt-based paint that could withstand the hardships on road.

We know asphalt is as expensive, even car paint is expensive too. Colourful cars ruled the roads in the 1920s and if you choose light and bright colours it would cost you more.

Tires do have a lot of safety features the no-slip tread helps the tires not to skid, snow-tires prevent sledging, and run-flat tires let you drive even after you have ruined the tires.

Some tires are also made of walnut shells, as you know these are super-strong, as their “micro bits” help tires grip over slippery roads. But that should make the tires nut-coloured right?

So why have tire manufacturers gone with the colour black?

Popular tire maker Goodyear too asked the same question. In the 1950s Goodyear came up with tires donning different colours to match your car. They even went to an extent of letting their users change tires regularly to match your fancy evening dress. They also had tires made of translucent material with lights inside them. But why weren’t these tires a hit?

Just like the white tires, the colourful tires too got dirty. Also, these tires were really very costly. No one actually liked the idea to spend a lot of money on something that would not last long.

Even the world’s biggest tire is also black, this tire was first used as a Ferris Wheel at the New York World’s Fair in 1964. You can still find it on the side of Highway I-94, in Detroit. It weighs a massive 12-tons and is a whopping 80 feet tall.

Paradoxically, Lego is the world’s largest tire manufacturer, the company makes thin tires with a diameter of ½ inch and they produce more than 318 million tires a year!

So it is the compound Carbon Black which colours the tires black. This compound makes the tire stronger which helps you to drive to destinations you desire.

I hope all the tire talk didn’t leave you flat.