Who has been the best leader in this century? VOTE NOW

The largest piece of the turret for Shell’s Prelude Floating Liquefied Natural Gas (FLNG) facility has set sail from Dubai for the Samsung Heavy Industries shipyard in Geoje, South Korea, where the facility is under construction.

The turret is part of a mooring system designed to ensure Prelude FLNG can operate safely in the most extreme weather conditions. At almost 100 metres high, it is the largest in the world. The turret will run through the front of the facility and connect to giant chains that will keep it moored securely over the Prelude gas field. The turret mooring system will allow the facility to turn slowly in the wind and with currents – ensuring it can remain safely at its location through the most powerful cyclones.

“Prelude FLNG combines our many years of experience in shipping and in managing complex LNG and offshore projects. It’s great to see our innovative designs and technologies become a reality as we reach significant project milestones like this,” Matthias Bichsel, Projects & Technology Director at Shell said.

“Designed in Monaco, built in Dubai, shipped to South Korea and for use off Australia, the turret is an example of the truly global nature of this project.” 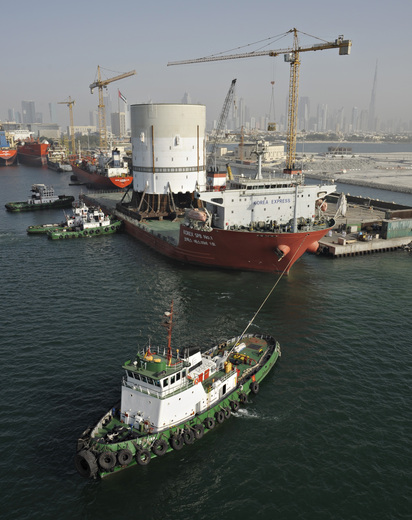 Shell was the first company to commit to an FLNG project, and it expects Prelude FLNG to be the first of many such Shell facilities.

Once complete, Prelude FLNG will operate in a remote basin around 200 kilometres off Australia’s north-west coast, for around 25 years. It will produce about 3.6 million tonnes of LNG a year to help meet rising global demand for cleaner energy.

After the first 25-year assignment, Prelude FLNG could be refurbished and moved to a different field for another quarter century.

FLNG will allow Shell to produce natural gas at sea, cool it onboard into LNG, and pump it directly into ships that will transport it to customers around the world. It can mean faster, cheaper and more flexible development of offshore gas fields that would otherwise be too costly to develop.