How to Save Money on Shipping?

TRAVEL DESTINATIONS - TOP 10 IN THE WORLD

Emirates to Resume Flights to Accra and Abidjan from 6 September, Expanding the Airline’s Network to 81 Destinations

Milan: Top Things to do on a Perfect Weekend Getaway

Vietnam: what to do on the country's beaches and cities

Emirates and the Republic of Angola, in its capacity as the majority shareholder  of TAAG Linhas Aéreas De Angola, announced the signing of a Management Concession Agreement* which will see Emirates take a role in the management of TAAG. The agreement lays the foundation for both airlines to jointly leverage commercial opportunities in Africa and beyond. 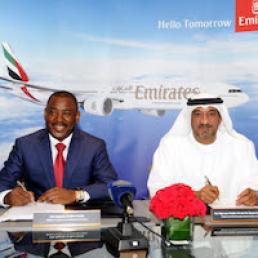 This initiative is to further the Republic of Angola’s vision to create a world class Angolan carrier with the support of Emirates. As part of the agreement*, Emirates will work closely with the Angolan government and TAAG Linhas Aéreas De Angola to formulate and implement a business plan, provide management support and devise fleet and route network strategies, whilst bringing synergy through the complementary networks. Emirates will not contribute equity under this agreement* but appoint four senior managers to work for TAAG Linhas Aéreas De Angola.

Both airlines will also cooperate across a wide range of areas including bilateral code-sharing on cargo and passenger services, participation of customers in both airlines’ frequent flyer programmes and passenger and cargo handling. Emirates has also committed to allocate its resources to staff and crew training on best-in-class business and operational processes and systems.

TAAG Linhas Aéreas De Angola will additionally explore business opportunities with dnata, in particular its passenger and cargo handling, flight catering and travel services. dnata, part of the Emirates Group, is the largest provider of air travel services in the Middle East and employs about 23,000 staff in 38 countries.

H.H. Sheikh Ahmed said: “Through this partnership Emirates aims to provide deeper reach and better connectivity for our passengers in Central & South Africa. At the same time, we see an opportunity for TAAG Linhas Aéreas De Angola passengers to benefit from Emirates’ global network.

We see huge potential in Africa, and are keen to continue playing an active role in contributing to its economies. Emirates will continue growing our presence in Africa by opening new routes, increasing flight frequencies, and upgrading aircraft to meet the increasing demand. Exploring mutually beneficial agreements with established carriers such as TAAG Linhas Aéreas De Angola is another key strategy. We believe this new partnership will build on the success that we have seen on our Dubai-Luanda service, and also deliver operational and business synergies for both airlines.”

H.E. Augusto da Silva Tomás, the Minister of Transport for Government of Angola said: “The signing of this agreement today marks a very decisive step towards the restructuring of TAAG. With Emirates, our new partner and a leader in the world of civil aviation, equipped with know-how, technology and experience, TAAG is starting a new era of growth and progress which will also positively impact the development of Angola.”

As African economies continue to flourish and develop, Emirates is well placed to contribute to this growth, by providing valuable air links that enable trade and tourism flows. Emirates operates over 160 flights across the continent each week, connecting African economies and markets with Dubai and beyond to a global network of over 140 major cities.

* The agreement will only take effect after a number of conditions have been satisfied, including the receipt of various government and regulatory approvals.