The Top Perks of Living in Wine Country

Craft Something Craveable This Holiday Season With Kellogg's® Crackers 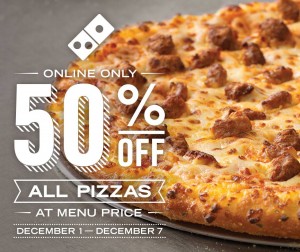 “We’re excited to bring even more convenience to customers who are taking advantage of Cyber Monday,” said Chris Brandon, Domino’s Pizza spokesperson. “Online shoppers won’t have to take any time away from getting great deals, thanks to Domino’s variety of online ordering options.”

The 50 percent off deal is only available on menu-priced pizzas ordered through Domino’s digital ordering channels which include Domino’s website (www.dominos.com), Domino’s mobile website and the iPad®, iPhone®, Android™, Windows Phone 8 and Kindle Fire® apps.

“About 40 percent of Domino’s sales in the U.S. are placed through digital channels,” Brandon said. “We hope customers who haven’t experienced the convenience of digital ordering yet try it with this great weeklong offer.”

Customers can reorder their favorite order online in as little as 30 seconds after they create an Easy Order™ with Domino’s enhanced online Pizza Profile platform.

Founded in 1960, Domino’s Pizza is the recognized world leader in pizza delivery, with a significant business in carryout pizza. It ranks among the world’s top public restaurant brands with its global enterprise of more than 11,250 stores in over 75 international markets. Domino’s had global retail sales of over$8.0 billion in 2013, comprised of nearly $3.8 billion in the U.S. and over $4.2 billion internationally. In the third quarter of 2014, Domino’s had global retail sales of over $2.0 billion, comprised of $0.9 billion in the U.S. and $1.1 billion internationally. Its system is made up of franchise owners who accounted for nearly 97% of Domino’s stores as of the third quarter of 2014. The emphasis on technology innovation helped Domino’s generate approximately 40% of U.S. sales from its digital channels in 2013, as well as reach an estimated $3 billion annually in global digital sales. Domino’s recently launched its ordering app for iPad®, adding to an existing ordering app lineup that covers nearly 95% of the smartphone market. In June 2014, Domino’s debuted voice ordering for its iPhone® and Android™ apps, a true technology first within both traditional and e-commerce retail.

Top Chocolate Brands in the world