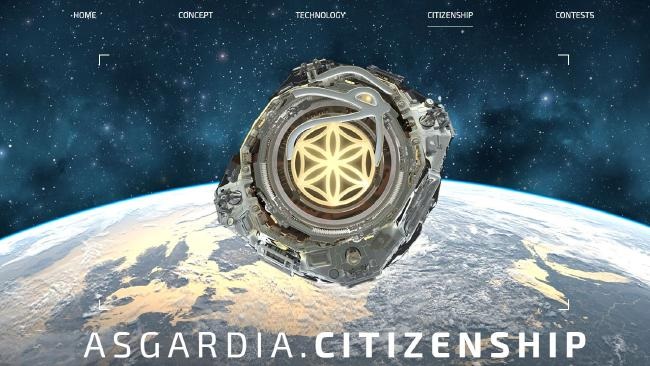 A GROUP of scientists, engineers, businessmen, and lawyers has unveiled plans for the “first nation state in space” in an ambitious bid to become the guardians of Earth.

Dubbed Asgardia after a mythical city in the sky ruled by Odin in Norse mythology, the country will consist of at least one satellite launched into orbit as early as next year, according to those aiming to create the world’s newest member.

The project’s website states the floating nation “will offer an independent platform free from the constraint of a land-based country’s laws.”

The project is led by Russian nanoscientist and businessman Igor Ashurbeyli who believes the celestial state will one day join the United Nations.

He founded the Aerospace International Research Center in Vienna and is currently the chairman of UNESCO’s Science of Space committee — credentials that no doubt go a long way to allay understandable scepticism of the project, which even he admits sounds a little kooky.
Igor Ashurbeyli, the chief backer of Asgardia.
Igor Ashurbeyli, the chief backer of Asgardia.Source:Supplied

At a press conference in Paris on Wednesday local time he said, “the scientific and technological component of the project can be explained in just three words: peace, access, and protection.”
Others aligned with the consortium include space experts and researchers from universities in Canada, the United States and Russia.

The unusual plan is about opening up space to the world’s global citizens and prompting a discussion about the regulations underpinning space activity. The team behind the idea also wants to ensure that humanity has an independent “country” which prioritises scientific advancement over political or commercial ambitions.

But the loftiest goal harboured by those behind the project is the creation of a “state of the art protective shield” defending Earth from cosmic threats, such as asteroids, solar flares and space debris. Such a goal is a pie-in-the-sky idea at the moment, however, given that the world’s top space agencies have yet to figure out how to prevent their satellites colliding, let alone stop a massive space rock from hitting Earth.

The organisation has not disclosed its current level of funding but it’s understood that Mr Ashurbeyli has put a substantial amount of capital forward to launch the project. It is unclear where the enormous amount required to sustain the mission into the future will come from.
While the initiative remains somewhat vague its most immediate intent is to reshape the legal framework that governs space.

The ultimate aim is to create a legal platform to ensure protection of planet Earth and to provide access to space technologies for those who do not have that access at the moment,” Mr Ashurbeyli told The Guardian.

Currently the 1967 Outer Space Treaty is the predominant international legal document that underpins the rules for space activity but it has become increasingly outdated and ignored by world governments.
The treaty states that responsibility and liability for objects launched into space rests with the national government of the state (or company) that sent them into orbit. However the Asgardia team wants to establish a new precedent that sees the responsibility for the satellite lay with the people who join the Asgardia nation — forging a new entity that lies outside the current system of nation states.
Steven Freeland is a Professor of international law at Western Sydney University and recently completed a review of Australia’s Space Activities Act 1998 which governs civil space activities in Australia.

He knows a number of the consortium members “very well” and said “the people involved are of the highest calibre and quality.”

Due to a lack of details he was reticent to speak on the viability of the mission but seemed unsure of the ambitious timeline.

However Prof Freeland said the project could usher in much needed changes to the ad-hoc nature of international space law, pointing to the International Space Station as a prime example.
“Different national laws apply depending on where you are in the space station,” he said. “When you’re in the Japanese part, Japanese law applies and when you’re in the US part, US law applies.”
International law is typically reactionary and as yet we don’t have a robust legal framework for when humans permanently populate space.
“Ultimately people will get married in space, have babies in space and murder each other in space,” Prof Freeland said.

Ambitious projects such as Asgardia and others like the Mars One mission highlight the need for a genuine legal framework for when that time comes.

If you want to join it’s as easy as signing up online and, theoretically, you can become a citizen of Asgardia without ever leaving home. At least in the beginning, people won’t actually reside on the satellite.

At the time of writing more than 1400 have already signed up to join the space nation and once that number reaches 100,000 it can apply to join the UN, the project’s chief backer says.
For the time being the project is running competitions to decide on important things like a flag and a national anthem for the future space nation.
So far the technical details are scarce but a spokesperson for the consortium said the Asgardia group will continue to reveal information and believes it will be able to launch its first satellite into space within 18 months.

There are some prominent people behind project Asgardia, but for now it remains to be seen if the idea, or the satellite, ever takes off.

As the planet becomes more crowded, eyes are rising to the stars. The colonisation of space is no longer science fiction, it’s big business, from NASA to entrepreneurs like Elon Musk. Frans von der Dunk is a space lawyer, and one of the few people in the world trying to bring some order to the space race.

Scientists unveil first prototype of Mars rover made in Mexico