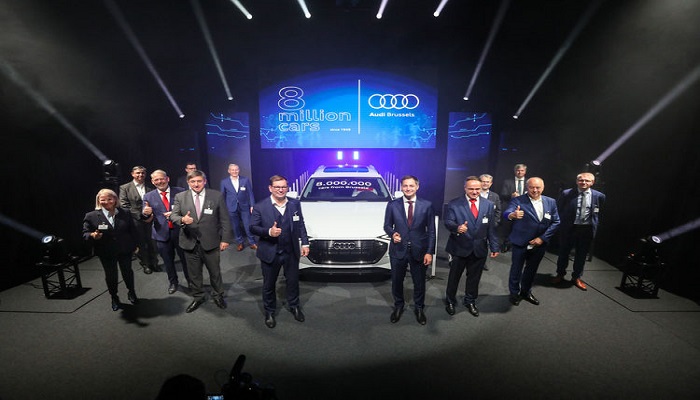 The eight millionth car comes off the assembly line at Audi Brussels. Markus Duesmann, CEO of AUDI AG appeared enthusiastic on his visit to Brussels, a site that was designated a “Factory of the Future” only in the last year. Since the fall of 2018, Audi Brussels has produced the first fully electric SUV for the brand with the four rings, namely the Audi e-Tron, and in early 2020, it began mass production of the Audi e-Tron Sportback.

Audi Brussels is celebrating a special milestone: eight million cars have been built in the Belgian factory since it was founded in 1949. The car that crossed that threshold is an Audi e-Tron in metallic Glacier White. The jubilee car will become part of the extensive historical car collection in the Audi tradition. At first, however, this historically significant Audi e-Tron will remain for a while at its production site in Brussels, where it is an attention-grabber for visitors.

Alexander De Croo, Prime Minister of Belgium, Belgium’s Deputy Prime Minister, and the Minister of Mobility, Georges Gilkinet, as well as Audi’s executive board, were on site for the celebration and visited the factory.

“Trailblazer and model for electromobility”

Markus Duesmann, Chairman of the Board of Directors of AUDI AG, looked toward the future and emphasized the site’s role as a “key factory for electromobility in the Audi Group.“ With the Audi e-Tron, not only did production of the brand’s first fully-electric SUV start here, but the battery assembly is also groundbreaking for the Group – also thanks to innovative solutions like the high-voltage battery analysis software BattMAN (Battery Monitoring Analysis Necessity), which has since been used by several brands in the Volkswagen Group. “The consistent shift in our portfolio toward electromobility is the greatest challenge in the company’s history. In electromobility, Brussels is a trailblazer and a model. In the transformation of other locations, we are benefiting from the experiences gained here in Brussels,” said Duesmann.

Volker Germann, CEO of Audi Brussels, emphasized the role of the staff: “We put our employees at the center and invest in digitalization and intelligent processes and products. Our employees have hundreds of thousands of training hours in preparation for the transition to electromobility.” Sabine Maassen, Member of the Board of Management for Human Resources and Organization at Audi adds: “Audi is following a defined technological roadmap with a focus on e-mobility and digitalization. At Audi Brussels, it is easy to see how we have closely aligned HR’s transformation with our corporate strategy – with clearly formulated targets with a clear commitment to our team and targeted qualification. After all, transformation is only possible together.” More than 3,000 employees are currently producing the Audi e-Tron, e-Tron Sportback, e-Tron S1, and e-Tron S Sportback2 models. More than 115,000 units have been produced so far. Models from the e-Tron family will also roll off the assembly line in Brussels in the coming years as well. The current best-selling fully electric premium SUV in Europe still has more than half of its product life cycle ahead of it.

Apart from electromobility, Brussels is also a trailblazer in the field of sustainability: in 2018, the multiple award-winning location was the first Audi factory and the first mass-production site in the premium segment worldwide to establish carbon-neutral production. The factory uses green electricity and is supplied by a large photovoltaic system (107,000 square meters [1,151,738 sq. ft.]). The heat required for production also comes from renewable energy via coverage through biogas certificates. Emissions that are currently technically unavoidable are compensated through certified carbon-credit projects. Peter Kössler, Board Member for Production and Logistics at Audi: “For us at Audi, economic success is inseparable from environmental protection. Premium mobility doesn’t only mean that our products meet the highest standards – it also means that they are consistently made in a sustainable way. As part of our Mission: Zero program, Audi Brussels was the first Audi factory worldwide to manufacture cars under net carbon-neutral conditions, making it a pioneer and instigator for our other sites.” Within the framework of the Mission: Zero program, Audi is also consistently working in the fields of water use, resource efficiency, and biodiversity to reduce its ecological footprint in production and logistics, alongside decarbonization.

The first car off the assembly line was a Studebaker

Today’s Audi factory has had an eventful history. The first Studebaker Champion sedan rolled off the assembly line on April 7, 1949. In 1965, the last Studebaker, number 21,675, left the factory. In the interim, Volkswagen AG became the main employer in the factory and had the VW Beetle and the VW Transporter built in Forest. Around 1,000 Porsche 356 Cabriolets were also built in the Brussels suburb in the early 1960s. In 1970, Volkswagen took over the factory completely. In the early 1980s, the VW Golf completed the program: almost four million units of this successful model were built in Brussels.

Audi takes over the factory in 2007

The next milestone in the history of the factory came in 2007: AUDI AG became the owner of the plant. Subsequently, Audi Brussels converted the factory – where the VW Polo and the Audi A3 were assembled at the time – and in doing so made it possible to produce the Audi A1, which made its debut in the Audi model package during that period. Today’s premium model from Audi Brussels was born in 2018 when the factory produced the first fully electric series model in the Audi Group: the Audi e-Tron. Thus, the factory became purely an e-factory trailblazer in electromobility.