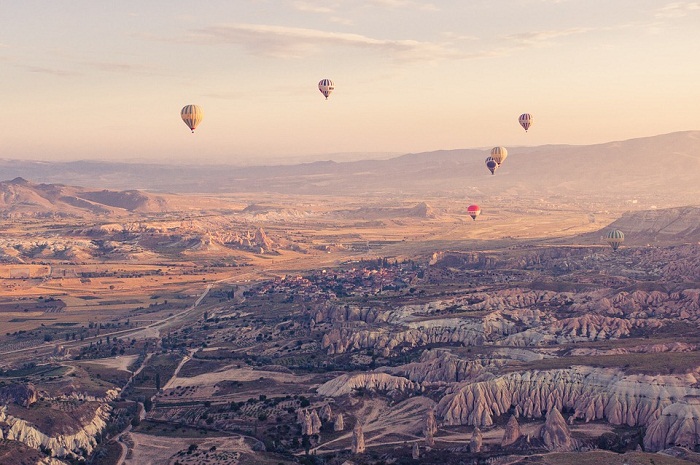 Filledwith imperial sites left out of the procession of rulers, and blessed with a breathtaking landscape that never ceases to please, Turkey is a stunning location that surrounds Asia and Europe. Turkey gives tourists a multitude of all kinds of locations. Its colorful community, popular cuisine, and its immense past win the hearts of all those who enter there, while it’s majestic scenery and its magnificent peaks are gems within themselves.Turkey can better be represented as conventional and modern combined with a variety of spectacular views for tourists to discover. With several incredible places, our top 10 Turkey’s best tourist attractions are must-see on your Turkey Tours.

Situated in Istanbul, Ayasofya (Hagia Sophia) is regarded as the 8th wonder of the world. Hagia Sophia is among the finest old buildings and possibly the most popular tourist destination to never miss on a Turkey tour. This magnificent structure was originally constructed in the 6th century under the rule of Eastern Roman Emperor Byzantine Justinian I. It has an impressive design and a stunning combination of Byzantine and Muslim décor. You’ll find amazing mosaics and other impressive types of contemporary art as you reach the building. It also is notable as it merges multiple religions, and many tourists see Ayasofya as a message of unity, prosperity, and inclusion.

Cappadocia is yet another heritage landmark that is worth visiting on Turkey Tours. It is distinguished by distinctive cliffs, formed by hundreds or thousands of years of water and air modifying the ground. Cappadocia is renowned for its high-rise rock peaks, called “fairy chimneys” for its beautiful appearance and peculiar past. The underground settlements of Cappadocia are one of the most interesting and exciting tourist destinations of Turkey.

Exploring secret cities is a breathtaking, true, and exciting experience. The major tourist destinations are the hidden settlements of Kaymaklı, Mazi, and Özkonak. You can explore this place on foot, but most of the tourists still choose to see this wonderful scenery from a hot air balloon.

Founded by Sultan Ahmed I, the Sultan Ahmed or Blue mosque was founded to contend with his competitor Hagia Sophia and, with its structure of progressively wide domes, this massive project contributed to characterize the landscape of Istanbul. The Blue Mosque’s scenic view will please even the toughest sightseer. The interior is almost as large and contains blue tiles that give this majestic building its title. The Blue Mosque excels from the exterior with its six minarets and vast design.

Regarded as the best remaining specimen of the ancient period theatre still existing on the planet, it is among the greatest destinations of elegance. The Aspendos Theatre was founded during the reign of the Roman ruler Marcus Aurelius in 155 AD and could hold around a crowd of 15,000 to 20,000 people. The theatre hosted several artistic performances and festivities under Marcus Aurelius’ reign. Today, the Aspendos Theater still thrives without missing nearly all of its initial features. If you’re a fan of history, you ought to visit Aspendos.

Pamukkale, which means “cotton palace” in Turkish, is an unbelievable place in the west of Turkey, renowned for its white terraces. Situated at the travertines’ peaks, it was a spa hub initially established by the Greeks and then later ruled over by the Romans. The historic area contains thermal waters that are rich in minerals and flow down white travertine terraces. Even now, thermal waters are known for their soothing properties.

Situated on the south-eastern side of Turkey, Mount Nemrut is a brilliant spot. It is clustered with the shattered remains of once majestic statues that protected it. This unusual and desolate spot has to be among the oddest ancient monuments in Turkey. The biggest appeal is to experience the sunrise from the east terrace.

Antalya is one of the top vacation spots and the fifth-largest Turkish city. This city has some of Europe’s finest beaches. The Antalya Museum is acclaimed as being one of the best in the world, with a beautiful range of ancient Greek and Roman marble sculptures, making it a great base for exploring the area.

Turkey is full of ancient cities to head to on Morocco Tours, making it hard to pick only a few for this article. However not to be skipped, Ephesus is a city of temples and marble-painted paths. It holds many of the best known Greek and Roman ruins in the world and is also an excellently-trodden feature of the visitor path from nearby destinations.

Patara is one of Turkey’s most popular sandy beaches. With a coast of 18 kilometers, the beach provides more than enough space, but even at the peak of the season, you can always find a peaceful space far away from the people. Established in the 8th century BC, Patara still has several remains.

Topkapi Palace was historically a lavish palace, constructed during the rule of the Ottoman Empire. The Sultans lived in this palace for four centuries. Worth a visit experience, it is regularly ranked among the best destinations in Turkey. Best known for its glitz and glamour, the palace is adorned with jewels, and visitors enjoy the wide and peaceful gardens.

Advantages of Choosing Memphis Tours for Your Next Turkey Tour

Memphis Tours are among the most prominent and major leader in the tourism industry provides a wide variety of advantages to its customer base. Making sure that your adventure with us will keep you wishing for even more. Following are a few of the reasons why Memphis Tours should be a traveling partner in your Turkey tours:

How to Install a Tire on a Rim By Hand