Biologists at Caltech have developed a new system for visualizing connections between individual cells in fly brains. The finding may ultimately lead to “wiring diagrams” of fly and other animal brains, which would help researchers understand how neurons are connected.

“To understand how the brain works we need to know how neurons are wired to each other,” says Carlos Lois, research professor in the Division of Biology and Biological Engineering at Caltech and principal investigator of the new research, which appears in the November issue of the journal Development. “This is similar to understanding how a computer works by looking at how transistors are connected.”

Animals are made up of different types of specialized cells. In order for an animal to function, the cells have to be able to communicate with each other. For example, neurons directly communicate with muscle cells so that an animal can move. In diseases such as cancer, this communication process can go awry: when tumors metastasize, they no longer “listen” to neighboring cells that tell them not to grow. Instead, the cancer cells grow uncontrollably and migrate to other parts of the body. 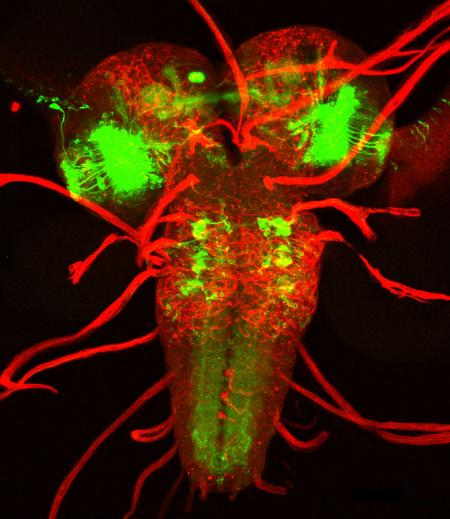 In the new study, Lois and colleagues created a synthetic system for visualizing communicating cells in the fruit fly Drosophila melanogaster. Though this initial study focused on the brain, the system could be applied to imaging networks of cells in any other organ.

The technique depends on two groups of cells: the emitters, which are those that give off a signal, and the receivers, which are those that register the signal. Emitters glow red, while any cell they are in contact with (receivers) glow green. The researchers take pictures of the red and green cells through a microscope, and the resulting patterns reveal how cells in the brain “talk” to each other.

The system works through genetic manipulations of cells. The researchers genetically alter designated emitter cells in fly brains—various neurons or glial cells in this case—to express two independent proteins. First, the emitter cells are made to express a red fluorescent protein, which allows the researchers to identify the cells’ location. Next, the emitter cells express a molecule called a ligand that can activate receptors on receiver cells. All of the cells in the fly brain have the potential to become receiver cells: they are engineered to express a green fluorescent protein but only when activated by emitter cells. In other words, the red, ligand-producing cells make any cell they are in contact with turn green.

Among other applications, the system could be used to trace the path of cancer cells as they migrate through an animal’s body. “You could see how a cancer cell left a tumor from its site of origin and how it entered a particular organ,” says Lois.

In addition, the cells can be genetically manipulated in such a way to reveal not just the connections between cells but also their functions. For example, by rewiring the neurons in an animal’s brain, researchers could use the new system to study the role of those neurons.

“We can understand how a computer works by changing the way that the transistors are connected in a circuit, and observing how the output of the computer changes,” says Lois. “With the system that we have designed, we can modify how cells interact with each other in an animal, essentially rewire them, and examine how behaviors change as a result.”

Lois and his colleagues ultimately would like to use their new tool to create wiring diagrams of fly and mouse brains on a neuron-to-neuron basis. That goal may be years off but would provide clues to the complex workings of human brains and the diseases, such as cancer, that result when cell communication breaks down.

The Development study, titled “Monitoring cell-cell contacts in vivo in transgenic animals,” was funded by the National Institutes of Health. The lead author is Ting Hao Huang, a visiting graduate student at Caltech.