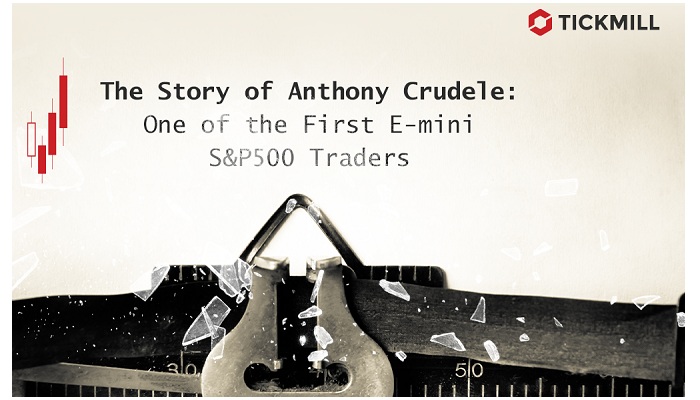 Oscar Wilde once said that “life is never fair, and perhaps it is a good thing for most of us that it is not”. Take from that what you will; but something everyone can attest to is that the ebbs and flows in life, our experiences and what we learn from them; shape us into who we are… No matter how ‘fair’ a situation may be, the outcome may not always be in your favour. But, it’s what we learn from that experience that pushes us on and helps us grow.

Much like life in general, the ups and downs of trading are what shape the type of trader that you become. A perfect example of that is the story of Anthony Crudele, a man whose net worth now stands at $32 million dollars(Focus, 2021),(WallMine, 2021).

Anthony’s trading story began by accident. Seriously, an actual accident… Fresh out of high school, young Crudele was involved in a serious car crash that changed his life forever. Still reeling from multiple surgeries to heal his broken femur, young Anthony decided that the best rehab for his injuries was to take a job as a runner at the Chicago Merchantile Exchange.

Back in 1995 (when Crudele was a fresh-faced 18-year-old), runners were an integral, yet small part of the CME’s overall functioning (Alden, 2015). Antony would be back and forth across the meat pits, delivering orders from desk brokers to traders on the floor. Armed with a runner’s signature yellow jacket, this was Anthony’s first step into becoming the Futures trader that he is today.

Young Anthony then began to climb the CME ladder, becoming a clerk in the Eurodollar options, eventually making his way into the S&P500 pits. Surrounded by a handful of great S&P pit traders, Anthony spent the next year of his life absorbing his surroundings so he could then become a member of the CME.

It was an incredible turn around. In just under 4 years Anthony had changed direction in such a spectacular way that he’d not only recovered from a debilitating accident but, used his misfortune to spur on his trading career.

At 21 years old, armed with a wealth of knowledge, youthful resilienceand sheer determination, Crudele began to trade in the S&P pit… However, no great story starts with a smidge of adversity and a quick happy ending.

In less than 6 months Crudele decimated his first account. Discouraged and disenfranchised, he paused. He sat outside the S&P pit to take stock of his situation and work out how he could turn the situation around. It was at this moment that his trajectory totally changed. As Crudele sat, he was approached by a man fromGlobex.

Now, launched in 1992, Globex was the first electronic trading platform used for Derivatives like Futures, Options and Commodity contracts across a wide range of asset classes(Segal, 2021). Originally it was developed to be a ‘low-impact means of providing after-hour market coverage’for Futures and Options trading: starting with 3 currencies and one treasury note(John W Labuszewski, 2012). However, this obviously isn’t where it ended up.

Just at the right time for Crudele, the E-mini S&P500 made its stellar debut on Globex in 1997; and he was invited to be one of the first ever traders of the electronic version of the S&P. Equipped with his ‘never-concede’ attitude, Crudele’s answer of “sure, why not” propelled him to the centre of one of the biggest shifts in trading history: the electronic revolution.

At around the same time as Crudele’s move, the stock market was on an extended 15-year rally. Because of this, the S&P 500’s notional value had soared, putting it out of reach for a vast portion of traders… In an almost poetic turn of events, this is where the CME changed everything.

They developed a smaller sized product, exclusively for CME Globex and launched the E-mini S&P500.

Directly linked to the convenience of immediate fill reports and the ability to trade on an equal footing with anyone in the world, the appeal of electronic trading mounted…And, it mounted fast. Coupled with the launch of theE-mini S&P 500, traders began to climb aboard the electronic trading train as it gathered steam.

One of the first passengers aboard this unstoppable movement was our very own Anthony Crudele. Now, at the start, his career didn’t just take off.It was simply the turning point where his own dedication to grow, learn and improve with the electronic movement began.

While finding his footing, Crudele started to develop his own indicators and trading method on-screen. His process was unmatched!Partly due to his own dedication, but also because there were no other computer traders on the floor…

However, this wasn’t to remain the case. As electronic trading gathered momentum, so did the diversity of traders. Once only accessible to those with extensive funding, now, almost anyone could learn to trade online and hone their own strategy. Over the next few years Anthony’s skills grew and transformed with the changing landscape.

At this point, it’s important to know that he wasn’t the only one.

Fast forward to May 6, 2010 and enter math prodigy turned trader, Navinder Singh Sarao; one of many high frequency traders involved in trading the E-mini S&P 500 (Martin, 2020). Both men, situated on opposite sides of the Atlantic, watched as the US stock market session started with the Dow Jones down. Opening more than 300 points down, at 2:42 pm the DJ was weighed heavy upon by Greece’s debt crisis. 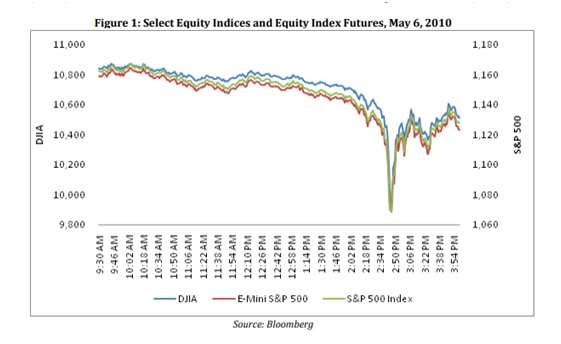 It was at this point tha­tSarao, dubbed the‘Hound of Hounslow’, would strike (Vaughan, 2017). Using specifically designed HFT software, Sarao’s algorithm effectively outstripped other HFT systems by ‘spoofing’ the market. His software would basically place thousands of orders before quickly cancelling them, creating artificial demand. Other HFT systems would then react by buying or selling that asset. He would then make genuine buy or sell orders as the price swiftly moved – generating huge profits[1] (Verity & Lawrie, 2020).

Meanwhile Crudele, just coming back from lunch, noticed that the E-mini S&P was down by around 25 points.So, with no headlines or other obvious reasons for the drop being apparent, he stepped in and went long (Technologies, 2016).

Just 5 minutes later, at 2:47 pm,the Dow plunged a further 600 points–further than it has ever fallen in its 114-year history.

The globe was aghast.

The plunge was so fast that Crudele didn’t even get the get the chance to put the stop in. Time seemed to stand still as selling escalated and almost his entire trading account disappeared before his very eyes… 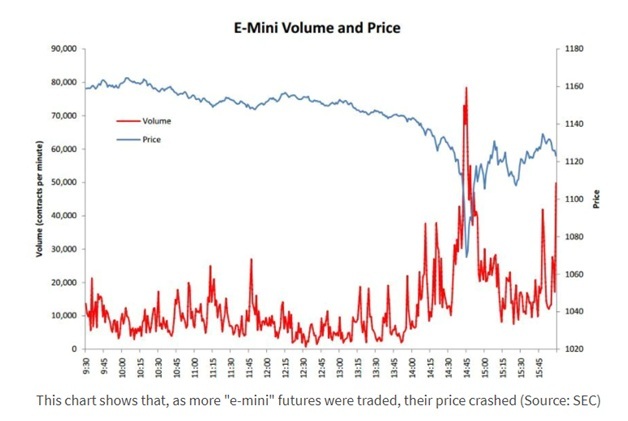 But. All was not lost. Moments later he saw it flash limit down for a brief second. Seeing his chance, Crudele tried to buy 100 contracts at the limit however, it turned and only partially filled his order. At this point Anthony started regaining composure and steadfastly gained his losses back.

As he inched closer to breaking even he decided to keep strong: riding the trade to take his account substantially higher than it had been before. In a split second, initially dogged by flashbacks to 1997, rather than having one of the worst days in trading like many of his peers, Anthony Crudele ended up having one of his best!

Crudele felt like a hero. After initially thinking that once again all was lost, he managed to stay collected and turn the situation into a hugely positive one. With such a sensational turn-around under his belt we can ask the question of what is really important when you’re an online trader?

In his own words Crudele has stated “First, reliability. The platform needs to run without glitches or drops. Second, speed. I’m sensitive to how fast my orders are responded to. And lastly, ease of use. I want to work with user-friendly and quick-to-understand tools”(Preda, 2016).

So, what could we learn from the likes of Anthony Crudele? Well, firstly, dedication to creating your own path in trading is the only way forward. Without his perseverance and continual development to better his skills, he wouldn’t be where is he today.

Secondly understanding the market that you’re trading is paramount. When you’re trading an asset you have to be aware of all of the intricacies that affect price. Without that understanding, you can’t possible forsee what will happen to an assets price.

And, lastly, risk management is king. No successful trader enters the market without an effective exit strategy in place. With all that in mind, we’ve created an exclusive webinar series to teach attendees about trading the E-mini S&P500 and how to identify opportunities master and consistency in volatile markets.

We’ll be teaching the fundamentals of market internals while attendees will also gain access to our gated E-mini Futures Strategy Group. If you’d like to follow in Crudele’s footsteps then we’d recommend clicking the link below to register.