The light offerings for the Audi e-tron GT

Wellbeing Behind The Wheel – The New Azure Range 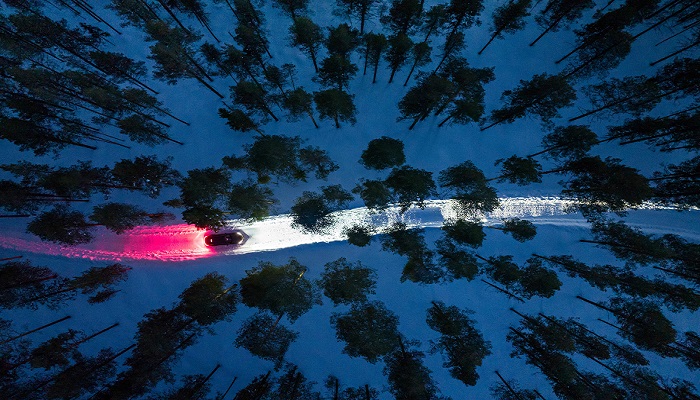 The lights on an Audi have long provided more than just safety. They represent the interface between design and technology and they have an authoritative impact on every Audi model’s visual appearance. That is particularly distinct in the exterior design of the e-tron GT quattro and RS e-tron GT – headlights and taillights are defining elements of these models.

The headlights of the e-tron GT quattro and the RS e-tron GT are three-dimensional sculptures with dynamic character and a modern aesthetic. The V-shaped headlights of the e-tron GT quattro come in three versions: LED, Matrix LED, and laser light as an additional high beam. An expressively designed X-shaped bezel secures the Audi laser light – the additional high beam is available as an option in the e-tron GT quattro and the RS e-tron GT series. The lower area of the headlight consists of detached elements with edges illuminated in blue. The central wings of the daytime running light signature form the upper part of the X. The daytime running light signature also functions as a turn signal and consists of a series of sharply drawn angles that create a sporty look. In the rear, a sculpted light strip spans the entire width of the e-tron GT. It dissipates outwardly in larger and larger arrow segments, thereby drawing an unmistakable taillight signature. The taillights are completely fitted with LEDs and equipped with a dynamic turn signal that runs flat under the taillight signature. The brake light is positioned under that in a low area.

Audi provides the e-tron GT quattro headlights’ LED technology with dynamic turn signals as standard equipment. Matrix LED headlights are available as an option for the electric Gran Turismo; they are standard equipment in the top model, the RS e-tron GT. Their continuous high beams shine with maximum brightness without blinding other drivers by dimming individual segments. Topping the range of the light offering for the e-tron GT quattro and the RS e-tron GT are the matrix LED headlights with laser light as an additional high beam. Starting at 70 km/h (43.5 mph), a laser spot is activated in the center of the headlight, between the low beam and high beam modules, doubling the range of the high beams. Additionally, an ultra-compact laser module in each headlight generates a light beam that illuminates several hundred meters as a spotlight.

The Gran Turismo’s top headlights offer an additional characteristic feature: the dynamic lighting effects of the leaving home and coming home function in the front and rear. The former starts upon unlocking the car and was inspired by the power of a sound wave: the lighting of the individual elements builds up quickly and powerfully before briefly pulling back and then going all in the second time.

The matrix LED headlights in the e-tron GT quattro and the RS e-tron GT generate high beams with light-emitting diodes that are bundled into shared reflectors or lenses, regardless of which model. They illuminate the road without blinding. As soon as the camera on the windshield senses other cars or towns, the control unit dims individual LEDs or adjusts them to a lower level. This makes several million light patterns possible. The matrix LED light fully illuminates the areas between and next to the cars without irritating other drivers because it shields other vehicles. Other light-emitting diodes in the Matrix LED headlight assume the function of the maneuvering light that illuminates the lateral area in front of the car when driving in reverse as well as the function of the all-weather light. This technology reduces glare from reflected light in poor visibility and delivers wider illumination as a fog light with quadrupled range. The cornering light is generated by shifting the focal point of the light along the curve. The turn signal is predictively activated shortly before the car arrives at an intersection. Headlights and taillights are equipped with dynamic turn signals. A band of LEDs is easily noticeable and actuated in successive segments in a few milliseconds, visually generating light motion in the appropriate turning direction.

In addition to the various headlights on the e-Tron GT, the night vision assistant is also available as an option. The marking light is included in that. Starting at 60 km/h (37.3 mph), individual LEDs in the matrix LED headlights to pulse repeatedly to mark perceived pedestrians, thereby highlighting pedestrians who are not in lighted areas against their surroundings. The heart of the night vision assistant is a thermal imaging camera. It has a 24-degree angle of view, its protective window is cleaned by a washer nozzle, and it is heated when cold. As a far-infrared system (FIR), the camera reacts to the heat radiated by people or animals in order to show them on the central display among the instruments. If the control unit foresees a hazard, such as when a pedestrian walks near the car on the street, the person is marked in red and a warning signal sounds at the same time. A warning also appears in the optional head-up display. The marking and the image contrast can be configured in the MMI.

Related Topics:AudiAudi e-tron GT
Up Next

For adventures with a touch of individual style: the MINI Cooper S Countryman ALL4 in the Untamed Edition