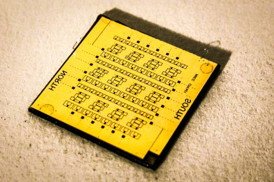 Computer chips with superconducting circuits — circuits with zero electrical resistance — would be 50 to 100 times as energy-efficient as today’s chips, an attractive trait given the increasing power consumption of the massive data centers that power the Internet’s most popular sites.

Superconducting chips also promise greater processing power: Superconducting circuits that use so-called Josephson junctions have been clocked at 770 gigahertz, or 500 times the speed of the chip in the iPhone 6.

But Josephson-junction chips are big and hard to make; most problematic of all, they use such minute currents that the results of their computations are difficult to detect. For the most part, they’ve been relegated to a few custom-engineered signal-detection applications.

In the latest issue of the journal Nano Letters, MIT researchers present a new circuit design that could make simple superconducting devices much cheaper to manufacture. And while the circuits’ speed probably wouldn’t top that of today’s chips, they could solve the problem of reading out the results of calculations performed with Josephson junctions.

The MIT researchers — Adam McCaughan, a graduate student in electrical engineering, and his advisor, professor of electrical engineering and computer science Karl Berggren — call their device the nanocryotron, after the cryotron, an experimental computing circuit developed in the 1950s by MIT professor Dudley Buck. The cryotron was briefly the object of a great deal of interest — and federal funding — as the possible basis for a new generation of computers, but it was eclipsed by the integrated circuit.

“The superconducting-electronics community has seen a lot of new devices come and go, without any development beyond basic characterization,” McCaughan says. “But in our paper, we have already applied our device to applications that will be highly relevant to future work in superconducting computing and quantum communications.”

Superconducting circuits are used in light detectors that can register the arrival of a single light particle, or photon; that’s one of the applications in which the researchers tested the nanocryotron. McCaughan also wired together several of the circuits to produce a fundamental digital-arithmetic component called a half-adder.

Superconductors have no electrical resistance, meaning that electrons can travel through them completely unimpeded. Even the best standard conductors — like the copper wires in phone lines or conventional computer chips — have some resistance; overcoming it requires operational voltages much higher than those that can induce current in a superconductor. Once electrons start moving through an ordinary conductor, they still collide occasionally with its atoms, releasing energy as heat.

Superconductors are ordinary materials cooled to extremely low temperatures, which damps the vibrations of their atoms, letting electrons zip past without collision. Berggren’s lab focuses on superconducting circuits made from niobium nitride, which has the relatively high operating temperature of 16 Kelvin, or minus 257 degrees Celsius. That’s achievable with liquid helium, which, in a superconducting chip, would probably circulate through a system of pipes inside an insulated housing, like Freon in a refrigerator.

A liquid-helium cooling system would of course increase the power consumption of a superconducting chip. But given that the starting point is about 1 percent of the energy required by a conventional chip, the savings could still be enormous.

Cheap superconducting circuits could also make it much more cost-effective to build single-photon detectors, an essential component of any information system that exploits the computational speedups promised by quantum computing.

Engineered to a T

The nanocryotron — or nTron — consists of a single layer of niobium nitride deposited on an insulator in a pattern that looks roughly like a capital “T.” But where the base of the T joins the crossbar, it tapers to only about one-tenth its width. Electrons sailing unimpeded through the base of the T are suddenly crushed together, producing heat, which radiates out into the crossbar and destroys the niobium nitride’s superconductivity.

A current applied to the base of the T can thus turn off a current flowing through the crossbar. That makes the circuit a switch, the basic component of a digital computer.

After the current in the base is turned off, the current in the crossbar will resume only after the junction cools back down. Since the superconductor is cooled by liquid helium, that doesn’t take long. But the circuits are unlikely to top the 1 gigahertz typical of today’s chips. Still, they could be useful for some lower-end applications where speed isn’t as important as energy efficiency.

Their most promising application, however, could be in making calculations performed by Josephson junctions accessible to the outside world. Josephson junctions use tiny currents that until now have required sensitive lab equipment to detect. They’re not strong enough to move data to a local memory chip, let alone to send a visual signal to a computer monitor.

In experiments, McCaughan demonstrated that currents even smaller than those found in Josephson-junction devices were adequate to switch the nTron from a conductive to a nonconductive state. And while the current in the base of the T can be small, the current passing through the crossbar could be much larger — large enough to carry information to other devices on a computer motherboard.

“I think this is a great device,” says Oleg Mukhanov, chief technology officer of Hypres, a superconducting-electronics company whose products rely on Josephson junctions. “We are currently looking very seriously at the nTron for use in memory.”

“There are several attractions of this device,” Mukhanov says. “First, it’s very compact, because after all, it’s a nanowire. One of the problems with Josephson junctions is that they are big. If you compare them with CMOS transistors, they’re just physically bigger. The second is that Josephson junctions are two-terminal devices. Semiconductor transistors are three-terminal, and that’s a big advantage. Similarly, nTrons are three-terminal devices.”

“As far as memory is concerned,” Mukhanov adds, “one of the features that also attracts us is that we plan to integrate it with magnetoresistive spintronic devices, mRAM, magnetic random-access memories, at room temperature. And one of the features of these devices is that they are high-impedance. They are in the kilo-ohms range, and if you look at Josephson junctions, they are just a few ohms. So there is a big mismatch, which makes it very difficult from an electrical-engineering standpoint to match these two devices. NTrons are nanowire devices, so they’re high-impedance, too. They’re naturally compatible with the magnetoresistive elements.”

McCaughan and Berggren’s research was funded by the National Science Foundation and by the Director of National Intelligence’s Intelligence Advanced Research Projects Activity.