Scientists at Oxford University have built a mathematical model to explain the secrets of the chameleon’s extraordinarily powerful tongue. 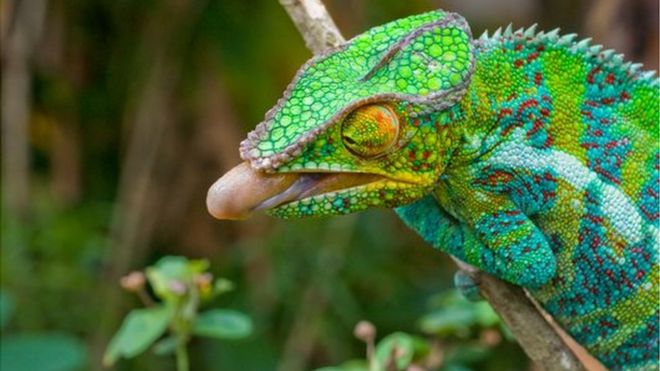 The chameleon’s tongue is said to unravel at the sort of speed that would see a car go from 0-60 mph in one hundredth of a second – and it can extend up to 2.5 body lengths when catching insects.

A team from Oxford’s Mathematical Institute (working in collaboration with Tufts University in the US) derived a system of differential equations to capture the mechanics of the energy build-up and ‘extreme acceleration’ of the reptile’s tongue.

Derek Moulton, Associate Professor of Mathematical Biology at Oxford and one of the authors of the paper, said: ‘If you are looking at the equations they might look complex, but at the heart of all of this is Newton’s Second Law – the sort of thing that kids are learning in A-levels, which is simply that you’re balancing forces with accelerations.

‘In mathematical terms, what we’ve done is used the theory of non-linear elasticity to describe the energy in the various tongue layers and then passed that potential energy to a model of kinetic energy for the tongue dynamics.’

Special collagenous tissue within the chameleon’s tongue is one of the secrets behind its effectiveness. This tissue surrounds a bone at the core of the tongue and is surrounded itself by a muscle.

Professor Moulton added: ‘The muscle – the outermost layer – contracts to set the whole thing in motion. We’ve modelled the mechanics of the whole process; the build-up and release of energy.’

The researchers say the insights will be useful in biomimetics – copying from nature in engineering and design.

Genetic History of the ‘Ship of the Desert’ Revealed