Hosting the Olympic Games - Hot or Not for Your Currency? 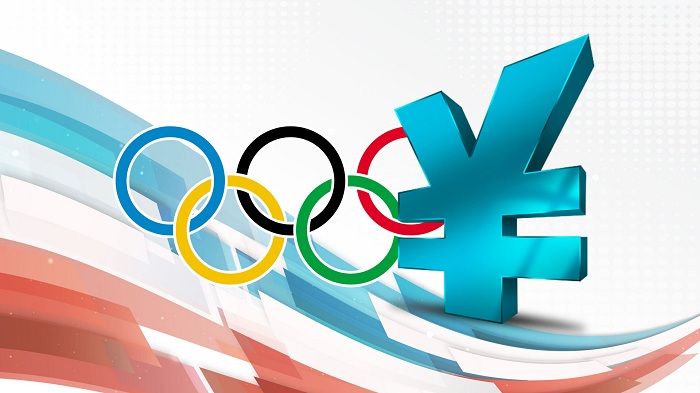 We’ve heard thousands of drums played simultaneously, Olympic cauldrons lit by flaming arrows, political boycotts and even Bjork. So, what is it about the Olympic games that have countries battling ferociously to become a host?

Delayed by a year due to the pandemic, the current Olympic games come as a much-needed respite following 2 years of lockdowns, pandemia and controversy. The theme: United by Emotion. And we really really are.

As an example of symbolism at its finest, the opening ceremony began with Arisa Tsubata running alone. This powerful woman (also a qualified nurse that treated COVID-19 patients) signified how, like all of us, our world champions have spent countless hours training alone. Training without companionship or any of the other emotional necessities that Olympians are usually afforded. Yet, united in the fact that, although these incredible men and women differ from us in their speed, agility, or other forms of physical prowess, we’re united in our experience of isolation. It’s a hugely powerful symbol.

Now though, we’re not only seeing the isolation faced while training, but we’re also watching the first Olympic Games in history to be conducted without spectators! So, with the Japan 2021 Olympics differing hugely from its predecessors, how could being an Olympic host right now affect the Japanese economy?

Our first port of call is to look at the economic benefits usually afforded to the hosts of the Olympic games. Several income generators for the city can come from ticket sales, licensing, increased employment, broadcast revenue, sponsorship, and increased tourism.

Now, one of the biggest earners for the host city undoubtedly comes from broadcasting revenue or sponsorship, eclipsing revenue from ticketing and licensing considerably. Our graph below gives you an idea of where the sources of revenue lie when a country becomes a host, and how these revenue streams have changed over the last few years. It’s important to note that revenue from Television and Ticket sales have increased significantly over the last 2 decades. Logically this follows the assumption that they’re increasing thanks to larger investments into facilities to cater to more guests and viewers on TV.

Although host cities usually aim to benefit from the impact of tourism, despite it being notoriously difficult to quantify, we’re not able to calculate how each individual tourist will be spending their money in a host city. However, after initially selling 4.48 million tickets with an expected windfall of $815 million from tourism alone, a state of emergency was declared until August 22nd. This has ensured that the games are going on without domestic or foreign spectators – essentially nullifying any income from ticket sales or tourism in general!

Even though revenue from ticketing pales in comparison to that from broadcasting revenue and sponsorship, an honorary professor at the Kansai University, Katsuhiro Miyamoto, estimated that no spectators would amount to an economic loss of up to$22 billion(¥2.4 trillion). Overall, by keeping the games as closed events, there would be a total loss of $3.5 billion(¥381.3 billion) combining tickets and other spending related directly to the games. This is a huge 90% loss of the original amount projected to come in for the games.

After such huge reductions due to a changing spectator dynamic, let’s focus on the income from broadcast revenue and sponsorship.

So, over 60 Japanese companies have spent more than $3.3 billion in sponsorship for the games, with an additional $200 million to extend contracts following the postponement! This record sum doesn’t even include partnerships with firms like Toyota, Bridgestone, Panasonic and Samsung that have separate sponsorship programs with the IOC, worth hundreds of millions of dollars.

NBCUniversal also garnered a record $1.25 billion in U.S. national advertising spending for the Games before the pandemic pushed the postponement. It now has plans to show more than 7,000 hours of content from the Tokyo Olympics across its networks and streaming platforms. However, over the last year, the company attempt to get support from sponsors for a second time. Their parent company, Comcast, also agreed to pay an additional $4.38 billion for U.S. media rights to the Olympics running from 2014 to 2020!

With an additional $1.4 billion from Discovery Communications (parent of Eurosport)to screen the Olympics from 2018 to 2024 across Europe, the Tokyo Olympics have fast become one of the most heavily invested events to date.

It’s also important to note that the enthusiasm for the events have faced a great deal of controversy with Japanese citizens protesting the games being held at all. People are experiencing waning enthusiasm for the sporting events which has led to stimulus effects on household consumption expenditure halving to2.5 billion(¥280.8 billion) while also dampening corporate marketing activity.

Overall, the economic benefits from promotional sport and cultural events look as though they’ll be reduced by half to $7.763 billion (¥851.4 billion).

Calculating the costs of being an Olympic host begin far before the city starts to prepare for the games. It starts during the bidding process, a whole 7 years before the games begin!

First, the hosts create a National Organizing Committee (NOC) who will be responsible for submitting a bit to the International Olympic Committee (IOC). Now, it’s important to mention there’s more than one round in the bidding process and each has its own additional costs. The first round is $100,000 per city, with a total of 8 cities vying for the honour.

Then we move to round 2 – with the 4 successful teams moved forward then having to pay an additional $500,000 each! New York City officials estimated that their bidding process would come to around $13 million!

Now, aside from investments in infrastructure, spending in Japan has grown exponentially since postponement last year. Initially, organizers stated that the cost of hosting the games in its entirety would come to around $15.6 billion, which includes the $3 billion racked up from postponing last year.

However, officials now state that the amount has ballooned to over $26 billion, 3 times more than stated in its original bid. Earning it the title of the most expensive Olympics in history and leaving Japan in an approximate deficit of$18.2 billion!

So, now we’ve had a brief look into some of the benefits and costs, let’s examine the actual impact on Japan considering these very different Olympics and the unprecedented costs that it’s facing.

Overall Impact on the Economy

When the bid was originally submitted for the 2020 Olympics the pandemic wouldn’t have even been a factor to consider. However, following our discussions, its become the deciding factor upon which we’ll work out how the Olympics have affected the Japanese economy.

Originally expected to be a huge income generator from tourism, the ban of foreign spectators dashed hopes that the games would assist in an early recovery of inbound tourism. Before the start of the pandemic, Japan generated 31.9 million foreign visitors which amassed $44 billion (4.81 trillion yen) for the economy. However, this fell a whopping 87% in 2020 to a mere 4.1 million – a 22-year low for Japan.

Nomura Research Institute’s TakahideKiuchistated that although Japan was forced to declare another state of emergency, the fallout from hosting a super-spreader event and the impact on the economy would far outweigh the costs incurred by having the games sans-spectators!

However, the continually ballooning costs are the burden of the Japanese taxpayers – who are funding around 55% of the cost! With an initial projected revenue of $6.7 billion from the Tokyo Games, the mounting costs at this point far outweigh the benefits from hosting the games; especially when considering the lack of income from tourism and ticket sales!

At the point that Tokyo was initially awarded the games in 2013, there was aforecasted income of around $2 billion from tourism in the form of tickets, hotels, food, beverages, and merchandise. Economists also expected additional ‘legacy benefits’ to the tune of $10 billion over the following decade. However, in the current climate, this income won’t materialize; making Japan seriously overshoot their budget. With that in mind, we think it’s important to illustrate those other Olympic gameshosts have also seriously overshot their originally stated budget. The image below gives a few examples of other hosts who have overestimated their income and underestimated their spending. 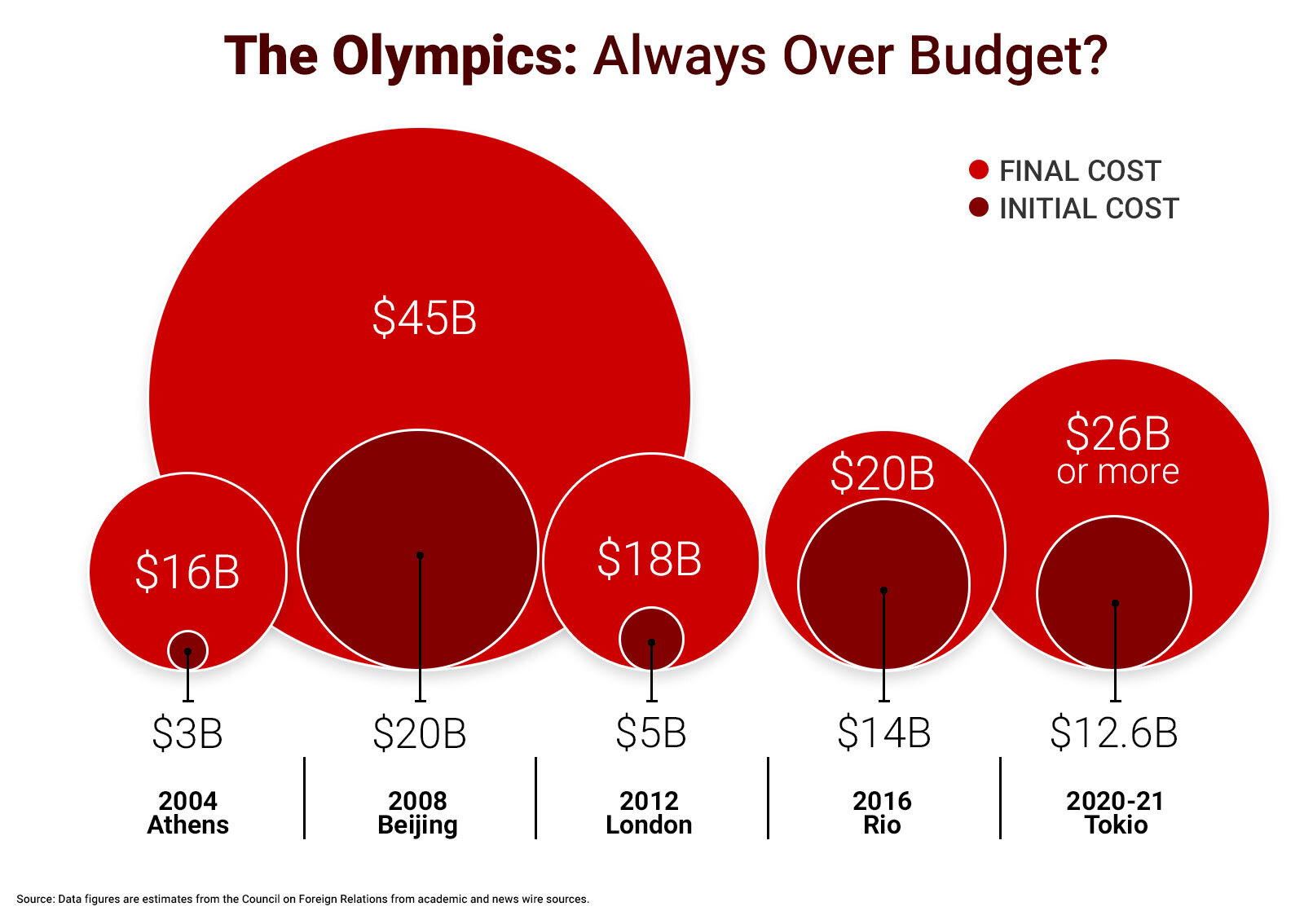 Overall, the purported benefit of hosting the Olympics appears to be virtually nonexistent for many previous hosts, which is especially the case for the Japanese economy. As we’ve examined the costs of hosting the Olympics in the midst of a pandemic, it’s pretty clear that a postponement and mounting outgoings expenditure without the expected incoming revenue will be leaving the Japanese economy in a huge deficit.

A multitude of other sources have also found that the likelihood of a positive economic impact from hosting the Olympics is unlikely. Boston’s National Bureau of Economic Research found little evidence of a positive impact while economists Stephen Billings (University of North Carolina) and Scott Holladay (University of Tennessee-Knoxville) found that a country’s GDP isn’t impacted by being a host!

With such monstrous expenditure coupled with negligible benefits, we must ask if the future bidding and hosting process will become a thing of the past.

It’s been widely expected that the Games may lead to a rise in infection rates, hence banning spectators from the events. However, this isn’t the exact way that the current rise in infection rates came about. At the start of the 4-day weekend, as the games began, new cases had already started climbing, forming what is expected to be the start of the fifth wave. Its size rapidly approaching that of the third and fourth waves and is widely expected to be the highest yet; likely to cause the Suga government to extend the current state of emergency to the 31st of August.

The Suga government is reportedly also considering the formation of an economic package to the tune of $275 billion (30 trillionyen)or 6% of GDP. Although this amount sounds huge, a large supplementary budget may not be needed as the government’s FY20 budget is unused due to COVID; thus, being rolled over into 2021. With that in mind, long-term impacts on the JPY will be limited.

A variety of domestic and foreign factors have contributed to a 6% slide in the Yen against the USD this year. Its vaccination program has only seen 19.1% of the population receiving their first dose and only 8.7% having both. In combination with the slow rollout, there’s been a significant delay in the return to normality which, coupled with no tourism, is shrinking the economy and putting the JPY underimmense pressure.

Searching for more insight about trading the USDJPY and other majors? Check out our eBook by clicking here. Now, we’re the type of company that’s always looking to start a conversation… Do you have different views about the Olympics? Pop in a comment below and join the conversation!