Industrial designer Hakim Sugito MSc. developed a frame to stabilize cameras while filming. He hopes that the system called Waltz will give independent filmmakers more freedom 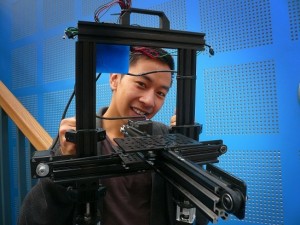 After stimulating experiences in amateur drama, Hakim Sugito decided he would like to try scripting and shooting a film (on video). He soon found out that setting up shot for shot and making smooth camera movements made filming a slow, cumbersome and expensive enterprise. What if you could make a stabilizing platform that could do still shots, tracks and pans with equal ease? You could simply do away with expensive tripods, steadycams or a dolly on tracks. He set out to develop such a stabilizing frame called the Waltz with a couple of creative engineers and designers working together in the Delft-based Het Collectief.

Last Tuesday (14 October) he graduated at the faculty on Industrial Design Engineering with a ‘9’ from his Professor Jo Geraedts and mentor Lili Sukirman MSc.

The way the frame works is that it actively compensates for disturbances it detects through its Inertia Measurement Unit or IMU. This is a stamp-sized combination of accelerometers and a gyroscope that measures translations and rotations in three dimensions.

“Actually, the IMU we chose was too cheap”, says Sugito. For 20-30 euro’s you can’t expect to have world-class but it underachieved nonetheless. “It reacts too slow and its signal is too noisy.”

Sugito is confident that the Waltz can be made quick enough to actively compensate for camera movements by using other components.

To simplify matters he chose to compensate for three translations only and not for rotations. There is a trend to equip camera’s with built-in compensation for rotations and Sugito assumes it will be a standard feature soon enough.

The Waltz is low cost due to standard materials originating from 3D printer-building providers. Apart from a standard kit Sugito contemplates bringing Waltz onto the market in the form of an open-source developers kit for 500 euro in the hope that others will jump on the bandwagon and develop Apps to operate the Waltz with your phone. Hardware add-ons for lighting or sound would be attractive options as well. But before he can do so, there are other projects from Het Collectief that demand his attention.

If the inventors among the independent filmmakers pick up the Waltz, it has the potential of bringing down productions costs substantially. And bringing down the costs of filmmaking increases the financial independence of filmmakers and their autonomy, Sugito proudly declares.