Expedition to Epicness! The 'Awesome' Tata Nano celebrates a World Record for the longest journey in a single country

Mr. Yadav and Mr. Karthikeyan today unveiled the book ‘Atop the World’ which has been written and edited by Mr. Thomas Chacko. Mr. Chacko is a Kochi-based, 63-year old motoring enthusiast, who completed a 78-day long national expedition in a Tata Nano, covering the length and breadth of the country.

These momentous achievements come from sheer passion for motoring, backed by a robust and reliable car like the Tata Nano. 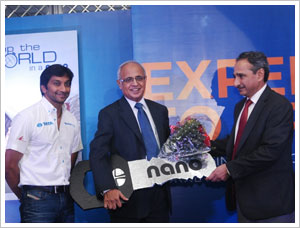 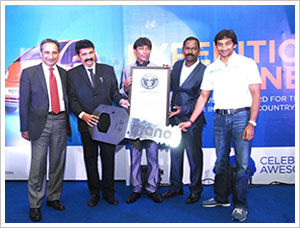 Speaking on this remarkable achievement, Mr. Ranjit Yadav, President – Passenger Vehicles Business Unit, Tata Motors said, “The Tata Nano has put India on the world motoring map when it comes to frugal engineering. The car has made us proud yet again with this record. The Tata Nano has proved its robustness and reliability in many car rallies and expeditions undertaken by Tata Motors and by customers on their own. It is motoring enthusiasts like Karun and Thomas who emote true passion for motoring. We are proud to be associated with them and we will continue to encourage such expeditions as it will enable customers to further understand and experience the brand’s true value.”

Celebrating epicness:
Tata Motors today felicitated Mr. Srikarunya Subrahmanyam and his team for having set the Guinness World Record by accomplishing the longest journey of 10,218 kms, in a Tata Nano, in 10 days, breaking the current record of 8046.74 kms. The team set on an adventure on March 21, 2013 from Kanyakumari to circumnavigate the country and successfully returned victorious on March 30, 2013 in Bangalore.

Celebrating a dream come true:
Tata Motors today unveiled the book ‘Atop the World’ written and edited by Mr. Thomas Chacko. The book captures Mr. Chacko’s dream project of exploring the country in a Tata Nano. Mr. Chacko successfully completed his 78-day long dream project on July 21, 2012. The 78-day all India drive has tested the Nano across the some of the most rugged terrains of the country and through all kinds of weather. The car emerged successful in this test of endurance.

Felicitating the two motoring enthusiasts, the Ace Racer, Mr. Narain Karthikeyan said, “Ilately have seen a new breed of traveller emerge, one who has a streak of adventure and passion for motoring. I have known people who have driven immense distances just for the fun of it, even though a far more painless option of taking a flight or a train was always there. This is exactly the spirit that encourages enthusiasts like Srikarunya and Thomas to overcome challenges that comes with driving long distances especially the sort of mileage that they have done. But all this effort has to be backed up by a reliable package – which is the car and having been involved with the Nano since it existed on a drawing board, I am not surprised that it has managed to achieve this.”