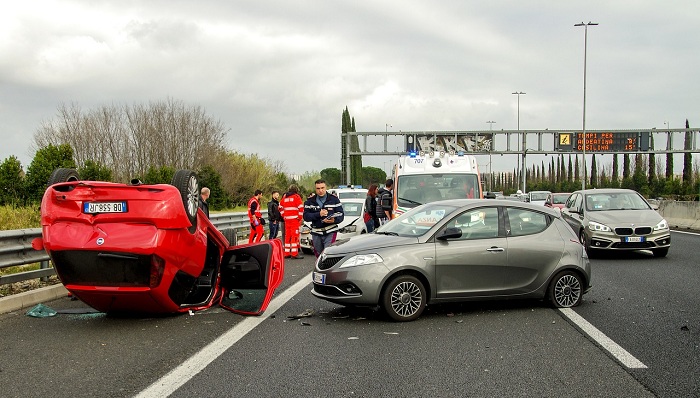 The fact that mishaps from an injury or accident often do not diminish the resulting pain and confusion. Chances are, if you wish to protect your legal rights after an accident, you have a few questions regarding the merit of your personal injury claim in Massachusetts. The best place to begin is with a licensed personal injury attorney who has been catering to seriously injured clients for over 25 years.

A personal injury lawsuit is defined as a legal dispute that arises when someone is harmed or injured by another individual who might be legally liable for that harm.

A personal injury case is a formal civil court procedure in which the person, represented by an attorney, who has been harmed is seeking compensation for their injuries. The purpose of the court session is to determine who is legally at fault. The conclusion of the personal injury case may come through a court judgment, or a more informal settlement agreed upon before the lawsuit even reaches a court.

In general, the responsible person’s insurance company will compensate the injured person to cover the costs of –

If the personal injury case is a medical malpractice claim, a personal injury attorney will work with insurers as well as lawyers who represent the hospital or medical facility.

The Statute of Limitations & Personal Injury Claims in Massachusetts

State laws determine the amount of time a plaintiff must file a lawsuit. In the legal arena, this restriction for time is known as a statute of limitations. This law is designed to prevent civil actions from lingering as a potential lawsuit for what would be, effectively, forever. It also encourages people to move forward and beyond civil claims, given time.

From a general perspective, the statute of limitations-clock begins when the injury occurs or when the plaintiff discovers the injury. Within this defined timeframe, a licensed Massachusetts attorney must initiate a personal injury lawsuit. Once the lawsuit has begun, the time limitations are no longer applicable.

Statutes of limitations are set forth by state lawmakers. The time allowed to file a lawsuit may vary between states and even by the type of injury within the same jurisdiction.

The Commonwealth of Massachusetts has, for personal injury claims, a three-year statute of limitations. So, a plaintiff has three years from the date the injury occurred to file a lawsuit in Massachusetts. In addition, legal malpractice provides for the same three-year time limit to initiate a legal claim.

Note that the state statute of limitations brought against the Commonwealth of Massachusetts (or any other town, city, or local government) is also three years. However, Massachusetts General Laws, Chapter 258, Section 4 notes in a presentment rule that the government entity must be served within a two-year timeframe. This essentially complicates the manner in which someone serves a government entity.

Most areas of the law source their relevant rules in state statutes (which, for criminal cases, would be the penal code). However, personal injury law has been developed through court decisions and legal scholar theses.

Many states have proactively sought to summarize the state’s development of personal injury law within written statutes. However, from a practical perspective, the primary source of law for legal claims resulting from an accident or injury is still relevant court decisions.

Personal injury claims are heard thousands of times each year. Some are settled informally, while others reach the inside of the courtroom to allow a judge to make the final decision regarding the case. Some personal injury lawsuits can result in a significant amount of money to compensate victims for their injuries and hardships.

Recent statistics note that there are more than 228 million drivers in the United States, of which nearly 5 million were driving in Massachusetts. According to the Bureau of Transportation Statistics, there were 2,740,000 injuries in the United States from motor vehicle crashes in 2019.

The National Highway TSA (Traffic Safety Administration) notes that, in 2020, more than 38,600 people died in a motor vehicle accident, which is a 7.2% increase from the previous year.

On a state level, according to the Federal Highway Administration within the USDOT, Massachusetts recorded –

If you’ve been injured or hurt in a car or motor vehicle accident and believe another person’s recklessness or negligence caused the accident or car crash, it is essential to consult with a licensed attorney as soon as you can.

Approximately 3 million seniors visit emergency rooms for treatment due to a slip and fall. Note once you have a slip and fall, you have double the chance of falling again!

And, about 20% of those who suffer a slip and fall injury will face a serious injury, which may include a head injury or broken bones, etc.

Many “slip and fall” accidents occur due to another party’s negligence. The plaintiff involved in a personal injury claim must be able to provide evidence that someone else has been negligent, and their recklessness has caused an injury. The following suggests how to determine liability and negligence –

The plaintiff can seek damages to compensate for the defendant’s negligent actions or even inaction.

The reality is that medical malpractice is a more common occurrence than most people think. While medical professionals take oaths to do no harm, there are instances where they fail to meet this responsibility.

It happens when a medical or healthcare provider –

According to The National Practitioner’s Data Bank, there were more than 35,000 Adverse Action Reports in 2021 in the United States. An Adverse Action Report is defined as the protocol that is used by state agencies or health care facilities/organizations to report an adverse action against a medical professional. 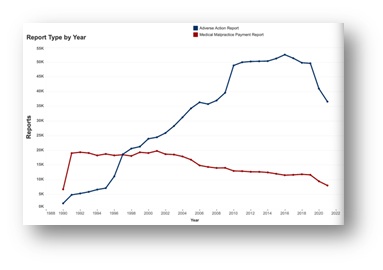 In Massachusetts in 2021, there were more than 500 Adverse Action Reports related to medical malpractice. 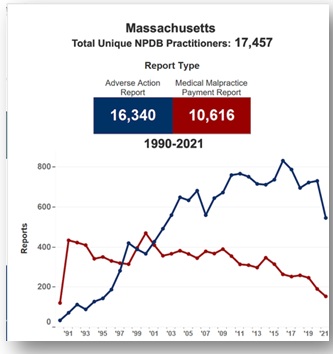 Injuries that result from a medical malpractice case are often life-altering. As such, it is important for victims to seek proper compensation for the hardships created by the incident.

The National Safety Council notes that about every 7 seconds, someone working is injured on their job. Many workers who receive injuries while working choose to file a personal injury claim with a licensed lawyer.

According to the US Department of Labor’s BLS – Bureau of Labor Statistics, there were 2.7 million workplace illnesses and injuries (non-fatal) in 2020. 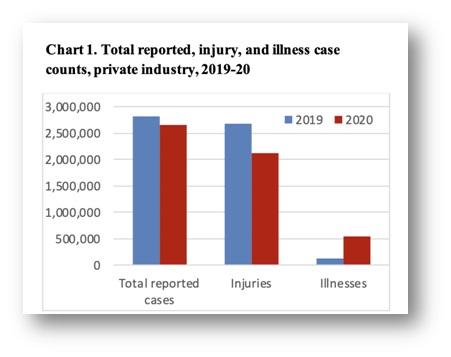 Using the most recent available data in the Commonwealth of Massachusetts, from 2019, there were more than 64,000 non-fatal workplace injuries recorded that year. The following table details the statistics for workplace fatalities in Massachusetts from 2016 through 2020.

Often, a business’ negligent actions (or inaction), when it comes to the safety of their workers, can result in terrible consequences and life-altering injuries.

If injured on the job, seek medical attention as soon as possible. Speak with your supervisor and begin to document the incident. –

If, for some reason, you cannot document the scene, ask a colleague to help because the more information that is gathered, the greater chance of a successful case. Speak with a personal injury lawyer who can determine the facts and seek the compensation you deserve.

A wrongful death lawsuit is a legal process that allows a loved one or family member to sue for the negligent actions of another person or business, or government entity. Mass General Laws – ch. 229, § two is the legislation governing a wrongful death claim in the state.

The latest data and information extracted from the Centers for Disease Control shows that accidents are the third leading cause of death in Massachusetts (2017). That year, more than 3,800 deaths were attributed to accidents in the state.

After learning of the unexpected loss of someone they love, family members, and loved ones, they shouldn’t be burdened with the victim’s medical expenses or burial costs if the death resulted from someone’s negligent actions.

A product liability claim occurs when the seller (or manufacturer), through a design flaw or manufacturing defect, injures the consumer who chose to buy/use the product.

Examples of a product liability lawsuit are as follows –

It is important to protect your legal rights after a defective product has injured or caused you harm. As noted above, product liability and personal injury claims are governed by Massachusetts’ Statute of limitations. It is vital to speak with a legal professional who can help preserve your rights.

Personal injury cases are not always the result of an accident. Many assault victims choose to file a personal injury lawsuit in a civil court that requests appropriate compensation for the damages and injuries caused by the assault. According to the United States Department of Justice’s BJS (Bureau of Justice Statistics), there were more than 6,000,000 violent incidents in the United States (2018).

Massachusetts defines assault and assault and battery differently. As noted in MA Gen Laws ch 265 § 13A

Assault, as well as assault & battery consequences, begin as misdemeanors. However, penalties and consequences may increase based on essential case aspects. It begins with the severity of the harm and includes, in part, the following –

Have you been injured in Massachusetts as the result of the recklessness or negligence of someone else?

Massachusetts law permits those injured by negligence or recklessness to seek financial compensation for damages in a civil court. Personal injury cases have the potential to get quite complicated, which is why it is important to have a team of attorneys working for you who have been catering to seriously injured clients for over 25 years.

Related Topics:MassachusettsPersonal Injury
Up Next

Pfizer Vaccine Reduces the Risk of COVID-19 Infection in Children