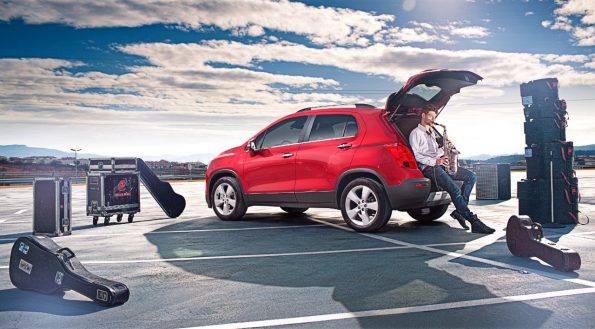 In 1935, Chevrolet invented the SUV with the introduction of the Carryall Suburban. At the time, few people would have guessed that the Chevrolet Suburban would eventually hold the record for being the longest-running vehicle nameplate in the world.

Today, some 78 years later, Chevrolet is launching its first entry in the small SUV segment, the Trax. “Trax is a modern, highly versatile yet fuel-efficient small SUV, that offers car-like handling and all-wheel drive,” said Susan Docherty, President and Managing Director of Chevrolet and Cadillac Europe. “It is the modern expression of one of Chevrolet’s core competencies, which is building and selling great SUVs.”

Chevrolet SUV family nameplates have stood for capable, practical and dependable vehicles and have often been at the forefront of safety and technical innovations. Early models saw the introduction of hydraulic brakes, safety glass and independent front suspension in 1937, while later models premiered energy-absorbing steering columns (1967) and antilock brakes (1988).

With Trax, Chevrolet is ready to embrace the group of car buyers that has been fuelling the significant growth the SUV-B segment has seen in recent years (Sales in the segment increased from 130,214 cars in 2008 to around 264,000 in 2012). These urban customers tend to be image-conscious individuals with active lifestyles. Many of them desire a vehicle that matches their off-the-grid individual status.

Trax gives buyers many of the benefits of a full-blooded SUV while combining the driving dynamics and fuel economy of a smaller car. Above all, Trax offers a maximum of versatility, from its flexible modern passenger cabin to all-wheel-drive to Chevrolet MyLink enhanced connectivity.

The looks and flexibility of a true SUV

A dual port grille with the iconic Chevrolet bowtie, pronounced wheel arches and muscular rear haunches, and a fast, rearward-swept roofline that flows into the integrated spoiler are key elements that define Trax’ exterior appearance.

The interior is characterized by flowing lines, modern design cues and a well-organized cabin. The rear seat row incorporates a regular 230V socket that can be used for recharging laptops and other electronic devices without the need for an adapter.

Storage amenities are plentiful. The loading space can be extended to accommodate a maximum of 1370L, with further space available under the cargo floor.

A host of storage compartments includes an available under-seat storage tray and two glove boxes, one of which contains outlets for USB and auxiliary devices that enable discrete connectivity for iPods, smart phones, and other electronic devices.

Additional cargo can be carried externally. The Chevrolet Trax features standard roof rails, has a roof load capacity of 75 kg and can tow trailers weighing up to 1200kg.

With the Chevrolet MyLink connected radio, a standard feature on upper trims of the Trax, drivers will have a system at their fingertips that is easy to use and allows them to access media including specialist apps from compatible portable devices.

The system can store the pairing information of up to 5 smartphones at one time. Mass storage devices, including MP3 players, iPod, iPad can also be connected through USB. There is a dedicated plug-in outlet for personal music devices and smartphones that do not use USB or Bluetooth connections.

MyLink users can take advantage of a selection of dedicated smartphone apps that will make their lives and driving more comfortable. With the help of BringGo, they can easily navigate using their phone, but without having to spend the kind of money that integrated navigation systems usually cost.

In addition to featuring 3D maps, lane guidance and live traffic updates, which require an active network connection through the smartphone, BringGo has the ability to store maps on the smartphone. This gives users access to locations and turn-by-turn directions even when the phone signal is poor (no data streaming/roaming charges).

Users who purchase the BringGo embedded smartphone app for the MyLink connected radio are also able to locate emergency information or use local search via Google.

Customers with a compatible iPhone running iOS 6 can ask Siri2, an intelligent assistant, to perform a number of tasks while they safely keep their eyes on the road and their hands on the wheel. An Eyes Free mode enables drivers to interact with their iPhones using nothing more than their voice while keeping the device’s screen from lighting up.

Owners can use Siri in Eyes Free mode to make voice-activated, hands-free calls to contacts on their iPhone, play songs in their iTunes libraries, switch music sources automatically from AM/FM radio to iPod mode, or listen to or send an iMessage or text message to a phone number or anyone in saved contacts.

On top of that, Chevrolet MyLink users can utilize the TuneIn smarthpone app, a streaming audio powerhouse that provides seamless connectivity to live local, international and internet radio and links listeners to a global network of 70,000 stations3.

Finally, owners of a Chevrolet MyLink-equipped Trax can opt to stream their favorite podcasts, radio shows and news to their Chevrolet vehicle by using Stitcher. This app enables them to create their own personalized, on-demand stations or discover new shows based on their listening preferences3.

The 1.7L turbo-diesel engine is the most frugal of the three and will return 62.7 mpg when mated to a manual transmission (FWD), while fuel consumption of the 1.4L turbo with the manual transmission will average 44.1 mpg. CO2 emissions are 120 and 149 g/km, respectively.

The AWD system which is available on variants equipped with the 1.4L turbo petrol or the 1.7L turbo-diesel engine automatically adapts to the prevalent road conditions and significantly improves traction on slippery or graveled roads.

A front/rear track width of 1540 mm and a wheelbase of 2555 mm ensure well-planted stability. The Trax’ tight body-frame-integral structure, a McPherson strut-type front suspension and a rear compound crank suspension all contribute to the vehicle’s responsive ride and handling characteristics.

The Trax features Electric Power Steering (EPS) with integrated wear compensator for precise steering action over the life of the system.

The strength of its structural design make Trax one of the safest small SUVs in Europe. Should the car roll over, it has been engineered to carry more than four times its own weight.

Six airbags, three-point seatbelts in all five seating positions, ISOFX anchoring systems for children’s safety seats and a collapsible pedal are equally part of standard safety features onboard the Trax.

1Photos and videos can only be viewed when the vehicle is stationary.

2 Siri is available in Beta only on iPhone 4S, iPhone 5, iPad (3rd and 4th generations), iPad mini and iPod touch (5th generation), and requires internet access. Siri may not be available in all languages or in all areas, and features may vary by area. Cellular data charges may apply.

Chevrolet is General Motors’ largest global brand with annual sales of almost five million vehicles in more than 140 countries. It is the fourth biggest global car brand in terms of sales and also one of the fastest growing brands in the world. Chevrolet cars combine bold design, performance, innovation and practicality. They provide outstanding value for money. Established in the U.S. by Swiss émigré Louis Chevrolet in 1911, the brand celebrated its centenary in 2011. The brand was re-launched in Europe in 2005. It is represented with a total of 2,500 sales and service outlets in Western and Central Europe. The UK Chevrolet line-up includes the Spark, Aveo, Cruze Saloon, Hatchback and Station Wagon, Orlando, Captiva, the legendary Camaro and Corvette sports cars and the extended-range Volt electric car. In 2013, Chevrolet is launching the all-new Trax small SUV and the all-new Corvette Stingray. More information on Chevrolet can be found at www.chevrolet.co.uk or media.chevrolet.co.uk.

The New Nissan Leaf In Detail