The transport routes of nutrients and messenger cargos can be compared to the traffic system of a city: A worldwide unique quantitative study of cell biologists of the University of Zurich shows that cells regulate the main routes, side routes and intersections by an intricate traffic control system, which guides the spatial and temporal distribution of substances within the cell.

Cells must transport nutrients and messenger cargos through its membrane and transport them within the cell at the correct time and place. This procedure is complex and is regulated with the help of specific genes. If disturbances in the transport mechanism arise, severe diseases, such as diabetes, cancer and diverse neurological pathologies, are the consequence. The discovery of the molecular principles of cellular transport was honored with the Nobel Prize of physiology and medicine in 2013. While knowing the intracellular roads and the functioning of the cars that use these roads is essential knowledge, one cannot understand much of how a cell functions without knowing how all this traffic is regulated and controlled. Cell and systems biologists of the University of Zurich could now create a first global map of the regulatory control systems of the majority of transport routes in a cell. This unique map has been published by the renowned scientific journal Cell as its cover story.

How cells uptake and transport cargos 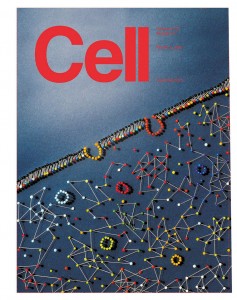 he uptake of nutrients and messenger cargos and their transport within the cell. This process is known as endocytosis and membrane traffic. Different cargos dock onto substrate specific receptors on the cell membrane. Special proteins such as  kinases, GTPases and coats, activate specific entry routes and trigger the uptake of the receptors into the cell. For their uptake, the receptors and docked cargos become enclosed by the cell membrane. In the next steps, the membrane invaginates and becomes constricted. The resulting vesicle is guided via several distinct stations, cellular organelles, to its final destination in the cell.

Cells regulate the main routes, side routes and intersections

Subsequently, Dr. Liberali calculated the hierarchical order within the genetic network and thereby identified the regulatory topology of cellular transport. “The transport into the cell and within the cells proceeds analogously to the cargo transport within a city” describes the scientist. “Like in a city, the traffic on the routes within a cell and their intersections is tightly regulated by traffic lights and signs to guide the cargo flow.”

Thanks to this unique quantitative map, the fine regulatory details of transport paths and processes within a cells could be mapped for the first time. Particularly the genes that encode for these traffic lights and switches are often de-regulated in disease. With this map, it is now possible to predict how this leads to traffic jams in the cells, causing the disease phenotype. Alternatively, since many drugs have been developed to target these traffic lights and switches, the map can be used to come up with possible drug combinations to target unwanted traffic, such as viruses, to the waste disposal system of the cell.

Related Topics:Dr. Prisca Liberaliendocytosis and membrane traffic.University of Zurich
Up Next