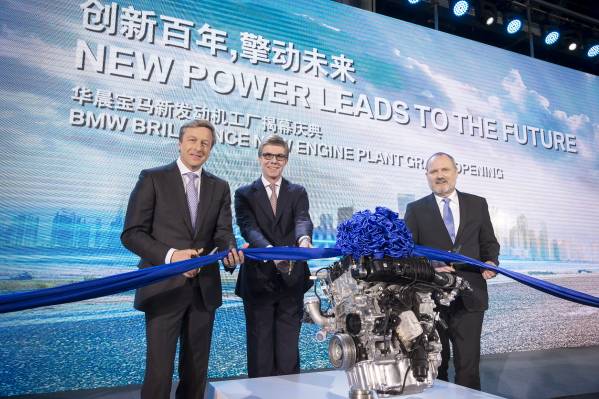 Munich/Shenyang. BMW Brilliance Automotive (BBA) opened a new engine plant with a light metal foundry in Shenyang Jan, 22, 2016. The new location will produce the latest generation of the BMW TwinPower Turbo three and four-cylinder petrol engines and forms part of the BBA production network based in Shenyang in Northeastern China. BBA is a long-standing joint venture between the BMW Group and Brilliance China Automotive Holdings Ltd. A total of around 2,000 BBA employees will work at the engine plant over the long term.

Oliver Zipse, member of the Board of Management of BMW AG, Production, stated during the opening ceremony: “This is another milestone in the history of our joint venture and further confirms the success of our cooperation. The new, groundbreaking engine plant, complete with a light metal foundry, will play an important role within the BMW Group’s worldwide production network. It forms part of our strategy for globally balanced growth with production capacity in the respective regional markets.”

Yumin Qi, Chairman of Brilliance China Automotive Holdings Ltd., expressed his gratitude: “During the last years BBA has made considerable progress and set up an excellent, state-of-the-art production location in Shenyang. With these facilities we are able to deepen our presence in the Chinese market and to continue our success. We do appreciate the great achievements of BBA as well as the good cooperation with our partner BMW Group.”

BBA President Dr. Anton Heiss also announced the next groundbreaking step for the joint venture at the event: “BMW Brilliance is recognized as one of the most successful premium manufacturers in China. Three new models are already in the pipeline for local production. One of these models, the BMW 2 Series Active Tourer, will be launched in the first quarter of 2016.”

Both the engine plant and the light metal foundry incorporate the latest state-of-the-art production standards and will supply BMW Brilliance’s Dadong and Tiexi automotive plants. Capacity, which currently stands at up to 300,000 units per year, is tied to production volumes at the two automotive plants. In 2015, local automotive production reached more than 287,000 units. BBA funded the necessary investment from its own resources; no additional capital was needed by the two joint venture partners.

BMW TwinPower Turbo petrol engines are characterised by an especially high level of efficiency and low emissions and represent the latest development in the BMW EfficientDynamics engine family. Using a high percentage of aluminium has significantly reduced the weight of drive trains. Heat management and acoustic features were also improved. At the heart of this engine range is the award-winning TwinPower Turbo technology, combining variable load control with state-of-the-art direct injection.

A special feature of the new engine generation is standardised, location-independent production using a so-called modular system. All engines of this generation are in-line engines and every derivative is produced on the basis of a core engine and a modular kit. This principle increases the proportion of identical parts used within each combustion type, i.e. petrol or diesel, to up to 60 per cent. Even around 40 per cent of the parts used in petrol and diesel engines are identical.

The standardised production system for modular engines forms synergies with the international BMW Group engine production locations in Munich (Germany), Steyr (Austria) and Hams Hall (UK): Value stream optimisation and economies of scale benefit production processes and make them more economical. These locations, which serve as competence centres for various engine types within the global engine production network, are able to share their know-how with other engine plants at any time.

A further advantage of a standardised production system is uniform, stable processes that enhance quality. At the same time, location-independent modular production is highly flexible: Its standardised systems and processes allow the company to respond quickly to changes in market and customer demand.

All production processes at the BMW Brilliance engine plant meet the BMW Group’s high global standards for quality, safety and sustainability. Know-how from the BMW Group’s global engine production network not only benefitted planning and construction of the new plant, but also helped with the introduction of sustainable production processes and technologies for the latest generation of modular engines: Following the example of the BMW Group Plant Steyr (Austria), machining work uses a water recovery system, resulting in completely wastewater-free production. This process uses innovative combined membrane technologies to treat all wastewater from mechanical production and feed it back into manufacturing.

The foundry sets new standards for sustainable production and has a capacity of up to 15,000 tons of aluminium per year. It is modelled on its partner plant in Landshut, Germany, whose wealth of experience was integrated into production processes.

Innovative manufacturing processes enable nearly emission-free production of sand cores. For the first time in China, inorganic binders are used and lead to a reduction of emissions of combustion residues by 98 per cent compared with the organic casting processes typically used in the industry. In addition, 90% of the sand used for casting can be recycled to reduce waste to a minimum. In 2009, the BMW Group became the first to use this state-of-the-art, eco-friendly technology completely in series production of castings worldwide.

The aluminium needed for casting will continue to be delivered in solid form and then liquified to around 760 degrees celsius in the on-site smelter. The “returns” from the casting process, i.e. metal residues separated from the raw cast during cleaning, are melted down in the foundry’s own smelting and holding furnaces and are reused.

Innovative wire arc spraying technology (LDS) is also being introduced for production of cast-aluminium crankcases: The cylinder faces of all crankcases are coated with a wafer-thin layer of iron particles sprayed on in liquid form. This results in a lower weight and less friction in the engine leading to lower fuel consumption.

The future: production of high-voltage batteries

In addition to combustion engines, the new engine plant will also produce high-voltage batteries for future Plug-in Hybrid models. As with the organisation of engine assembly, this project will entail close cooperation between BBA and the BMW Group to ensure knowledge transfer from high-voltage battery production in Germany.

With its three brands BMW, MINI and Rolls-Royce, the BMW Group is the world’s leading premium manufacturer of automobiles and motorcycles and also provides premium financial and mobility services. As a global company, the BMW Group operates 30 production and assembly facilities in 14 countries and has a global sales network in more than 140 countries.

The success of the BMW Group has always been based on long-term thinking and responsible action. The company has therefore established ecological and social sustainability throughout the value chain, comprehensive product responsibility and a clear commitment to conserving resources as an integral part of its strategy.