Beverages, Fall Treats and Savory Food to Eat at Starbucks 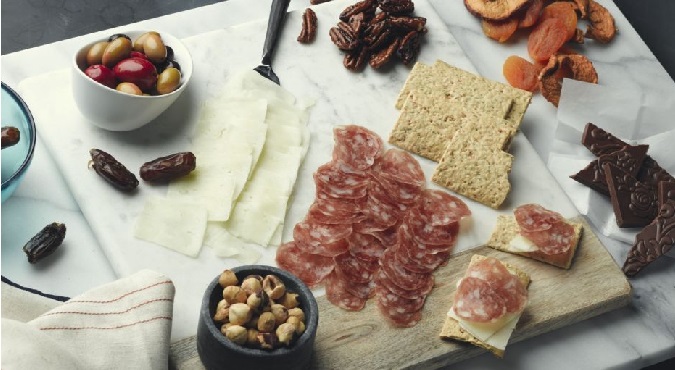 From holiday treats and gluten-free bars to protein-rich snacks and drinks with almondmilk, Starbucks offers a variety of food and beverages at stores in select markets or throughout the U.S.

Customers across the country can enjoy sweet bites and beverages that are perfect for fall occasions.

Day of the Dead Cookie – Great when paired with the Chile Mocha, this is a buttery shortbread cookie with a skeleton design for Día de los Muertos, a holiday celebrated throughout Mexico, in particular the Central and South regions.

Mummy Cake Pop – A fun mix of scary and sweet, this treat is vanilla cake and icing dipped in a white confectionary coating.

Siggi’s Vanilla Yogurt – Satisfying and with just a touch of sweet, this creamy, non-fat yogurt is made with Madagascar Bourbon Vanilla beans and is available in a 5.3-ounce cup.

At times, Starbucks launches new products in a limited number of stores or in certain regions to offer menu items that are locally relevant or to incorporate customer feedback before a national launch. The following are products that are available in select U.S. markets.

This Bar Saves Lives™ – These gourmet snack bars are packed with premium ingredients that are non-GMO and gluten-free. For every bar sold, This Bar Saves Lives™ gives life-saving food to a child suffering from malnutrition. The company has distributed aid in Haiti, the Philippines, Nepal, Cambodia and the Democratic Republic of Congo through giving partners like Save the Children and Action Against Hunger. The bars are available at select Starbucks® stores in California, Utah, Arizona, Nevada, Baltimore and Denver in four flavors: Madagascar Vanilla, Wild Blueberry Pistachio, Dark Chocolate Cherry & Sea Salt and Dark Chocolate Peanut Butter & Sea Salt.

Creminelli Italian Salami and Cheese Snack Tray – From Biella, Italy, the Creminelli family has been making meat and cheese for generations. Founded in the United States in 2008, Creminelli Fine Meats sets itself apart by using only antibiotic-free pork from animals raised in open living conditions. Their unique, natural-fermentation process gently cures and ages salami without chemicals or synthetic nitrates. While deli meats and cheese are more often used to make sandwiches in the U.S., fine meats and cheeses are consumed as snacks in many European countries. Creminelli hopes to bring this tradition to America in a convenient and accessible snack that is gluten-free and satisfies a desire for protein. Creminelli’s new Italian Salami and Cheese Snack Tray is now available at select Starbucks® stores in Colorado, Illinois, Kansas, Washington and Texas. It will launch in select Starbucks® stores nationally on October 10.

THINK Jerky – These snacks are made with sustainably raised 100 percent grass-fed beef or free-range turkey without added hormones or antibiotics. They are non-GMO, gluten-free and paleo-friendly. Each flavor of jerky is made from a unique recipe crafted by a different celebrity chef and can be found at Starbucks® stores in 18 states across the country, including Minnesota, Michigan, North Carolina and Florida. THINK Jerky will be offered in two flavors: Sriracha Honey and Sweet Chipotle.

Teavana Beverages Now Available in Starbucks Stores Around the World